Is Religious Freedom At Risk In Ghana? 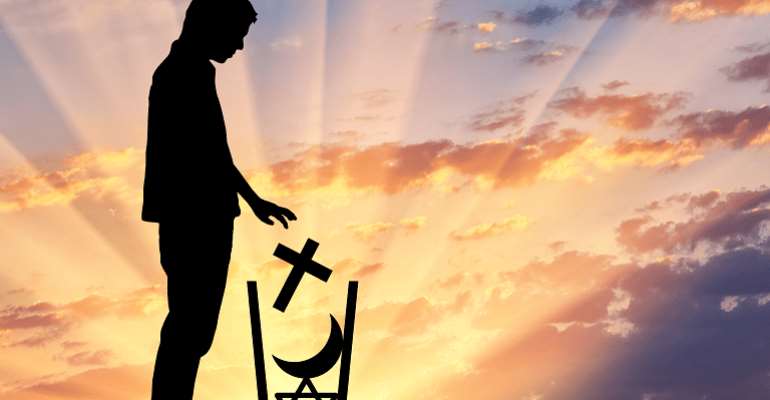 In 1978, James Warren Jones, leader of the People’s Temple in America, single-handedly orchestrated the mass religious suicide by the poison of over 900 commune members by using the front of a church organisation. In 1994, a similar scandal known as the Solar Temple led to roughly 74 “religious” deaths. Further examples of ritual suicides are the Heavens Gate scandal of 1997 or Adams House in 2000.

I cite these examples to formulate the question that will pioneer this article: religious freedom is a beneficial constitutional and human right accorded to all, but without some legislative safeguards, could it pose a potential threat to the well-being of well-meaning religious members of society?

“IN THE NAME OF THE ALMIGHTY GOD”, is the phrase that entrenches religion into our legal system by way of Ghana’s most supreme law, the 1992 Constitution. This, being the first sentence in both the preamble and the body of the Constitution itself, demonstrates the religious inclination of our legislature, and the Ghanaian community as a legal force. Article 21(c), which assures the freedom to “practice any religion and to manifest such practice” remains a fundamental legal precept.

The ambit of the word “religion” in Article 21(c), is so wide that it seems the Constitution secures for the people an intrinsic right to envision any ‘God’ they believe in. The Constitution further provides safety checks for potential abuse of this provision, by disallowing the deprivation of social benefits from children by reason only of religious beliefs. It also prohibits religious discrimination within political parties, and contains further clauses which oust these rights in case of abuse.

Although the Constitution has moulded a conceptual framework of what religious freedom should look like in Ghana, the respect for religious dogma may blind us to dangers of this freedom, or make others too timid to question fanaticism, for fear of social disapproval.

The relevance of religion in Ghana is perceptible in the increasing number of churches. The year 2014 recorded an astonishing 10,000 churches, referring not to building structures but religious groups which could be identified. The largely unimplemented Religious Bodies (Registration) Law, (PNDCL 221), required all religious bodies to be registered and have their activities regulated. In today’s 1992 Constitution, there is no express requirement to register religious bodies, but with growing concern for regulation, the Trust Bill was proposed, which sought to consolidate religious organizations, NGO’s and civil society organizations to be subjected to the control of the Trust Commissioner responsible for the registration of Trusts. It has yet to be passed.

The failure to monitor the steadily increasing number of religious institutions makes room for the potential establishment of cults, religious suicides, illegal activities and other harmful forms of undue influence on followers. In the case of Nyameneba v. The State, a religious group burned Indian hemp as incense and was acquitted on a charge for possession and use because they claimed not to know the nature of the herb. Whatever the activities of a church may be, not many Ghanaians may be willing to accuse a church of illegal activity. Instead, many of us may chance upon videos, or other evidence of questionable incidents in churches, but choose not to offend other believers by making an inquiry.

Janja Lalich, a TEDx journalist, describes some of the markers of a cult as follows: A cult is a group or movement with a shared commitment to unusually extreme ideology, usually embodied in a charismatic and often narcissistic leader. It targets people experiencing major difficulties in life. The members are subjected to indoctrination, and some cults play on the natural inclination to mimic social behaviour or follow orders. Cults require a high level of commitment, maintain a strict hierarchy and claim to provide answers to all of life’s biggest questions. Can we identify some of these subtle markers in some “churches” we see today? Contemplating the possibility of a mass religion-based suicide in Ghana may seem far-fetched, but cannot be ruled out as impossible! Though a mass suicide may be an extreme consequence of undue influence in religious bodies, there is also a danger of lesser forms of violence such as physical and sexual assault, as well as extortion.

Surely the reference to God in the Constitution acknowledges a God of peace and protection, not of violence and harm. It is acknowledged that the extent to which the law can pry into religious affairs is limited, and therefore we cannot also wait for legal action to be taken ex post facto; after major damage is done. Taking into account the state of the church in Ghana now, an appeal is made to all Ghanaians to be weary of these dangers, and for a dire need of religious supervisory bodies and education of citizens.

Can we tabulate the number and location of churches? Can we maintain a register of religious leaders? Can we arrange for supervisory bodies to oversee and chastise any illegal activities in religious organizations? Should non-charitable religious groups be subject to tax obligations? These are only a few of the questions boggling this young legal mind. Until we gradually begin to obtain answers, Ghanaians must be vigilant in their pursuit of whatever “God” they believe in, lest they fall prey to the vices of cultism and deadly religious fanaticism. We must be cognizant of these subtle markers that signal religious risk, educate ourselves and our loved ones. Certainly, religious freedom is a good thing, and must not be met with an indifferent legislature or an aloof society.