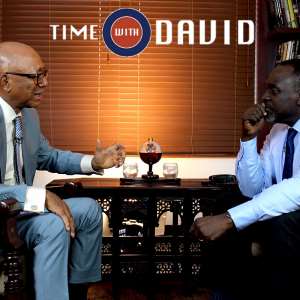 Former Commissioner for Human Rights and Administrative Justice, Mr. Emile Short, was recently in the news for attributing the shameless looting of funds by corrupt politicians, to the need to recover campaign expenditure.

The former Judge, sat across from veteran broadcaster David Ampofo, to have a conversation that bordered around corruption and the fight against it. Addressing the recent PDS-ECG debacle, Emile Short stated "It's obvious there wasn't due diligence".

Speaking during the freshly-released Time With David conversation, Mr. Short admitted that the winner takes all system of politics is part of the problems, that contribute to making corruption a malignant issue.

He explained that this is because the stakes are high. "When you lose, you lose everything. When you win, you win everything", emphasized Emile Short.

Mr. Short clarified the importance of passing laws like the Conduct of public officers bill, which has been pending since 2013.

He expressed disappointment that parliament has not passed that bill and advocated for it to receive expeditious attention.

Emile Short at different points in the interview, referenced Singaporean Leader, Lee Kuan Yew who ran a system of meritocracy and stated that "corruption is a threat to society", as a shinning example in the fight against corruption.

When referred by the host, to a statement by Special Prosecutor Martin Amidu, Mr. Emile Short agreed that leadership must crack the whip.

Speaking further on the special prosecutor and his office, Mr. Short said he was very pleased when Martin Amidu was appointed.

He confessed that the special prosecutor has made great effort in trying to fight corruption and added that the public has unrealistic expectations.

"I know what Martin Amidu has in court", Emile Short told David Ampofo, before asserting, "the public has been inpatient and want to see some high profile cases".

Mr. Emile Short held the view that Martin Amidu's track record shows that he has the courage to address corruption.

He described the Police CID as not being an independent body and cited the Australian Visa Scandal and the Mining Scandal sparked by an Anas Aremeyaw Anas expose, as cases of corruption that were investigated and cleared by the CID, with reports that remain unpublished.

Mr. Short observed that such occurrences do not give people confidence in the system.

During the interview, Mr. Emile Short disclosed that he is retired and enjoying it, playing a lot of golf and reading.