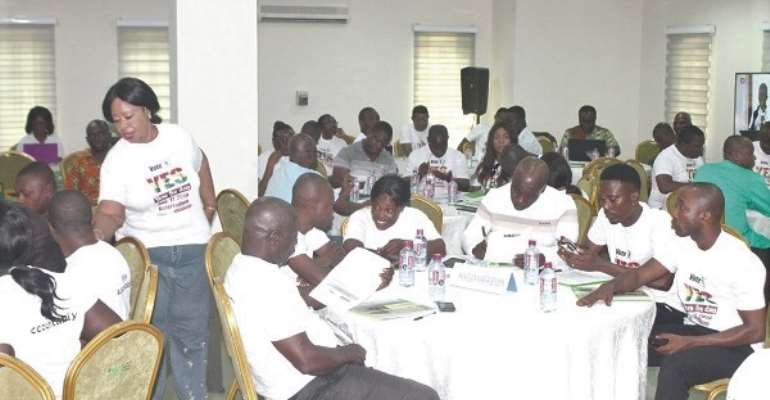 A two-day training programme aimed at equipping some stakeholders in the country’s governance system with knowledge and skills to mobilise broad based support for the upcoming referendum has ended in Accra.

Organised by a governance institution, the Institute of Democratic Governance (IDEG), the training programme formed part of the ongoing activities by the institution to get Ghanaians to vote “Yes” in the December 17, 2019 referendum.

Participants were selected from 10 regions where there is a high voting turnout.

They included representatives from various non-governmental organisations and media personnel.

Speaking to the Daily Graphic after the training programme, a senior research fellow of IDEG, Dr Emmanuel Ayisi, said the programme clarified the misconception surrounding the December referendum and also to sensitise participants to understand post-referendum reforms.

Background
Ghana will on December 17, this year, head to the polls to vote in a referendum to amend Article 55 (3) of the Constitution to allow for the election of MMDCEs.

Article 55 (3) of the 1992 Constitution, which is an entrenched provision, states that “Subject to the provisions of this Article, a political party is free to participate in shaping the political will of the people, to disseminate information on political ideas, social and economic programmes of a national character; and sponsor candidates for election to any public office other than the district assemblies or lower local government units”.

On the same day of the referendum, there will be the election of members of the district assemblies and unit committees.

Training
Throwing more light on the training, Dr Ayisi said the participants were taken through various referendum stages including past referenda held and the importance of the upcoming national referendum.

“We also took them through some of the potential risks in the referendum and how they can be addressed,” he said.

Dr Ayisi said one major wrong perception about referendum was that people thought it involved election of candidates or representatives but it just a decision on the part of the electorate to accept or reject a political question.

“Referendum refers to a general vote by the electorate on a single political question which has been referred to them for a direct decision to accept/approve or reject it. In referendum, voters vote either Yes or No,” he said.

Importance of referendum
Dr Ayisi said political parties, which do not win national elections, would have the chance to contest in district level elections and, if they won, would maintain control of some assemblies.

“It will encourage more inclusiveness in the governance of the country,” he added.