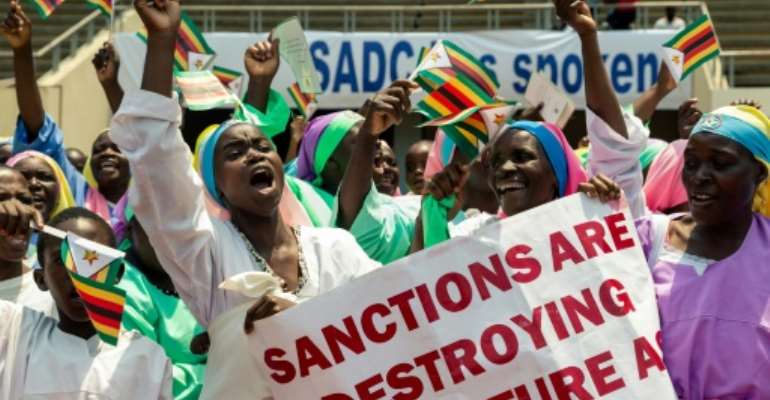 Demonstrators chant slogans and wave Zimbabwe's national flag during a rally to denounce US and EU economic sanctions. By Jekesai NJIKIZANA (AFP)

The United States said Friday that it would refuse entry to Zimbabwe's security minister as it voiced alarm over the government's crackdown on protests and the opposition.

The State Department said it would deny a visa to Owen Ncube, the minister of public security, under a sanctions law that targets "gross violations of human rights."

"We are deeply troubled by the Zimbabwean government's use of state-sanctioned violence against peaceful protesters and civil society, as well as against labor leaders and members of the opposition leaders in Zimbabwe," Secretary of State Mike Pompeo said in a statement.

"We urge the government to stop the violence, investigate and hold accountable officials responsible for human rights violations and abuses in Zimbabwe," he said.

Western powers had tense relations for years with Zimbabwe's veteran ruler Robert Mugabe, but hopes for a thaw after the military ousted him in November 2017 were short-lived.

Post-election violence last year after allegations of fraud claimed six lives, while at least 17 people died in anti-government protests in January after a fuel price hike.

The US announcement came the same day that President Emmerson Mnangagwa's administration organized a mass protest in Harare to demand the lifting of sanctions.

Bawumia to deliver keynote address at Nottingham University ...
15 minutes ago