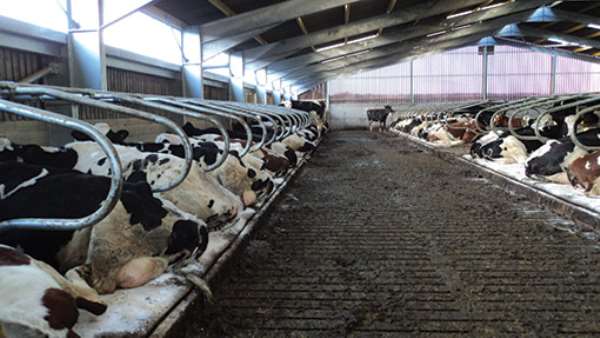 Growing and using Napier as a nutrient-rich animal fodder on the farm, could also reduce pressure on forests, according to new research.

A new study, by researchers at Lancaster and Wageningen Universities and the Centre for International Forestry Research in Kenya, suggests that by using Napier grass it is possible to intensify small-scale dairy farming and reduce greenhouse gas emissions.

The study, ‘ Intensification of dairy production can increase the GHG mitigation potential of the land use sector in East Africa ’, modelled the impact on greenhouse gas emissions and efficiency of three scenarios for feeding nutrient-rich diets to dairy cows in Kenya.

Unlike previous studies, the research factored in the impact of cattle’s diets on land use and forests, as well as measuring the emissions involved in producing the fodder and how diet alters the amount of methane cows emit.

Currently there are 2 million small-holder dairy farmers in Kenya - defined in the study as farms with ten cows or fewer. They tend to feed their livestock on a mixture of wild grasses grown on local grassland, and through forest grazing – letting their cows graze in commonly owned forests. This long-established practice reduces a forest’s ability to act as a carbon sink by removing vegetation and slows the speed at which forests regenerate after being cleared.

The three scenarios involved feeding cows on either silage made from maize grown locally or on a cultivated African Napier grass grown on existing grassland, or on a mixture of the two.

All three diets included small amounts of concentrated feed imported into the farms to feed livestock during the dry season. Maize yield per hectare was increased by adding fertiliser. Planting the perennial Napier grass on native grasslands causes less soil disturbance and emissions than planting maize, and is only fertilised with manures.

“The impact of dairy farming on the environment is a very hot topic globally at the moment,” said Professor Mariana Rufino, from the Lancaster Environment Centre, the principal investigator on the study, which was published in Global Change Biology.

“Increasing milk production really matters in Africa because even a small amount of milk can make a huge difference to a young child in terms of brain development, micronutrients and growth, particularly in the under-fives.

“Dairy production also empowers women and improves access to medical services and education because it provides a constant income. Milk is produced most of the year, while income from crops comes in seasonally.

“What our study shows is that it is more efficient to get cows out of the forest and to give them richer feed on the farm.”

“If you plough up native grassland to plant maize you release carbon, and producing and applying fertiliser involves carbon emissions,” Professor Rufino explains.

Napier grass produces a richer biomass per hectare than maize, with less impact on carbon emissions.

“Our study shows that there can be win-win solutions for both forest and agriculture development objectives”, said Professor Martin Herold from Wageningen University , co-author on the study. He emphasizes the key innovation of the study was the data-driven approach combining field and farm surveys with satellite remote sensing and simulation model to assess the different scenarios linking the forest and livestock sector.

“Intensification of the current Kenyan dairy sector, if done properly, can reduce emissions from the forest sector and so overall emissions. We believe this has implications for small dairy farms all over East Africa since both food security and enhancing forests are high on national policy agendas.

And it won’t reduce carbon emissions if the dairy sector expands overall, or if it moves away from small farms to industrial scale production.”

Professor Rufino said: “Currently the way the dairy sector’s greenhouse gas emissions are measured only include what is used on the farm. This study shows the importance of including all the emissions involved, whether from land use changes around the farm or from feed production.”

The study was funded by the International Fund for Agricultural Development.

The lead author of the study, published in Global Change Biology , is Patric Brandt from the Centre for International Forestry Research. Co-authors are Gabriel Yesuf from Lancaster University and Martin Herold fromWageningen University.