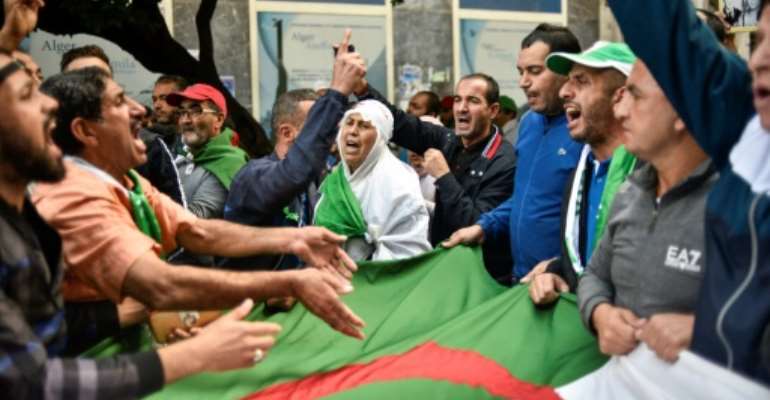 Mass anti-government protests in Algeria have entered their ninth month with demonstrators demanding an overhaul of the political establishment before presidential polls are held in December. By RYAD KRAMDI (AFP)

Algerians flooded the streets of the capital Friday to demand the overhaul of the political establishment and reject army-backed calls for presidential polls in December.

The protest came on the eve of a deadline for presidential candidates to register.

Veteran leader Abdelaziz Bouteflika resigned in April under pressure from the street.

Having now entered its ninth month, the mass protest movement "is growing as we near the presidential election," said Said Salhi of the Algerian League for the Defence of Human Rights.

"There are many people on the streets today" who remain steadfast in their demand for regime change, he told AFP.

"It is a real showdown," he added.

Activists are demanding sweeping reforms in the oil-rich country before any vote takes place, and say Bouteflika-era figures still in power must not use the presidential poll as an opportunity to appoint his successor.

The Hirak protest movement was formed in February to demand that Bouteflika resign instead of running for a fifth term.

It has demanded transitional institutions to replace Algeria's entire system of government, in place since independence from France in 1962.

Authorities have rejected these demands, but protests continue.

"There will be no vote," read a sign carried by one of the protesters in Algiers.

That message was accompanied by a drawing showing powerful army chief Ahmed Gaid Salah and interim president Abdelkader Bensalah being booted into "the dustbin of history".

Initially polls had been planned for July 4 but they were postponed due to a lack of viable candidates, plunging the country into a constitutional crisis, since Bensalah's mandate expired that month.

So far two presidential hopefuls -- both considered close to the regime -- have registered to run in the race.

They include Azzedine Mihoubi, leader of the Democratic National Rally party (RND), and a minister of culture in three governments under Bouteflika.

Five other candidates have made appointments to register before Saturday's midnight deadline (2300 GMT), according to the National Independent Elections Authority, formed recently to oversee the vote.

Algerians have meanwhile been angered by remarks made by Bensalah and broadcast by the RT television network, in which he "reassured" Russian President Vladimir Putin that the situation in Algeria "is under control".

Footage of the comments has gone viral on social networks with Algerians saying they felt "humiliated" by Bensalah's comments.

It "is shameful and an insult to the intelligence of the Algerian people," one user tweeted.

"When you are president, you do not 'reassure' a foreign country on internal politics... (while) ignoring the millions of Algerians who are protesting for democracy," said another on Twitter.

According to RT, Bensalah met Putin on Thursday on the sidelines of a Russia-Africa summit in Sochi.

"I asked to meet you to reassure you that the situation in Algeria is under control," Bensalah was quoted as telling Putin.

"The media has exaggerated the reality of what is happening in Algeria... although it is true that some elements are out on the streets each week" protesting, he added.

A prima facie determination as a pre-condition for removing ...
1 minute ago