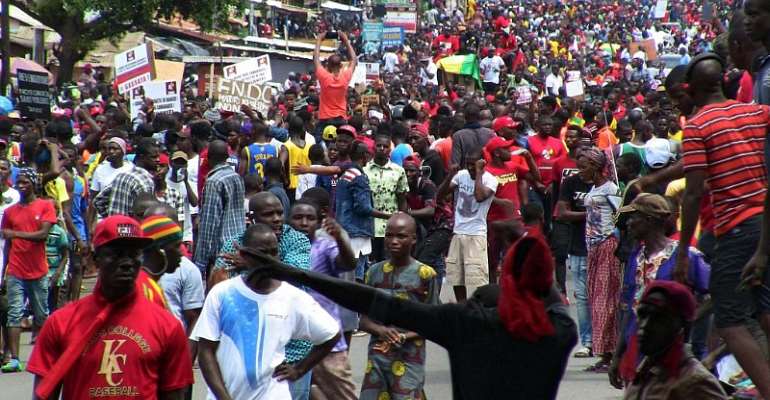 Demonstrators have returned to the streets of Guinea to contest the president's possible bid to seek another term. Unlike smaller demonstrations which saw at least nine people killed and several opposition leaders jailed, Thursday's march was peaceful. But the situation remains volatile amid allegations of Russian interference.

The situation in Guinea is "explosive," says Marie-Madeleine Dioubaté, an opposition presidential candidate.

"Mr Alpha Condé is nearing the end of his mandate in 2020 and he absolutely wants to seek a third term," she told RFI.

Eighty-one-year-old Condé has neither denied or confirmed whether he will run again in next year's presidential race.

But the fact that he's asked his government to look into drafting a new constitution that could allow him to seek a third term, has raised fears that he will reset the button on his presidency.

"The demonstrations are against rumours not facts, because we don't know yet if the president intends to stand for a third term. So, people are wasting their time," he told RFI.

“There is a debate in the country regarding a new constitution to be submitted to the people by referendum. They will decide either yes or no. This is an act of democracy," he said.

Crackdown on protests
The wave of demonstrations began on 14 October. At least nine people were killed that day when police opened fire on demonstrators as they ransacked military posts and blocked roads with burning tyres in the capital Conakry.

Authorities deny the use of excessive force, but have launched an investigation.

"What we saw last week were not demonstrations but riots by young people who had been brainwashed to destroy public property," comments Information Minister Somparé.

Several opposition campaigners and politicians were arrested and sentenced to prison for inciting civil disobedience, including Abdourahmane Sanoh, a former government minister and head of the National Front for the Defence of the Constitution, behind the current protests.

"I cannot make any comments on the decisions made by justice," says Somparé. "That is proof that the justice system is not under control, because we're not giving instructions to them, we're accepting their decisions," he said.

Mining boom for who?
The public's rage is also about corruption and discontent with a leader, whose victory in 2010 had raised hopes for democratic progress in Guinea after years of military rule.

For presidential candidate Marie-Madeleine Dioubaté, who is also the coordinator of the National Front for the Defence of the Constitution in France, Alpha Condé has failed to live up to the public's expectations.

“The population of Guinea are protesting because they are upset. You know our country has the largest bauxite mines in the world. We have gold, diamonds and yet the people don't get anything," she said.

"The government takes all the resources of the mining and the population gets poorer and poorer. They don't have even food, school, or access to health, so the population are fed up now, and want the president of Guinea to leave power.”

Guinea gets around a third of its revenues from the mining sector. Authorities insist that 15 percent of its profits are shared with communities impacted by the extractive industry and used to build social infrastructure projects around the country.

"Special" Guinea-Russia relationship
Alpha Condé has played down the scale of the protests. On Thursday in Sotchi at the first Russia-Africa summit, he vowed that Guinea was open for business.

"Let us be open to a more fruitful and stronger partnership for the best interests of Russia and the African people," he said on Russian news channel RT.

The Russian-Guinean relationship goes back a long way.

"Guinea was one of the first states to have a special relationship with Russia or the ex-Soviet Union," explains Emmanuel Dupuy, president of the European Institute of Perspective and Security Studies.

"On 28 September 1958, 95 percent of people said no to the continuing relationship with France, having gained their independence and Ahmed Sékou Touré was gratified for that by receiving the Lenin prize for peace in 1960," he told RFI.

Ideologically linked, the two countries today are seeking to boost their economic relationship.

Call for change
Russian companies like Rusal are hoping to fill the void left by American countries, says Dupuy, by profiting from Guinea's rich reserves of bauxite. A former Russian ambassador to Guinea has backed a change of the constitution to allow the octogenarian president to “reinvigorate” the country.

Guinea's opposition has denounced what it calls Russian interference and has urged Moscow to relinquish its support of Conde and not obstruct the people's desire for change.

"A new leadership will be better for the Russian people," reckons Marie-Madeline Dioubaté.

"We can safely supply them bauxite without fighting everytime, and I think this is a better way for Russian people to support a new leadership," she said.

On Saturday, Dioubaté and other members of the Guinean diaspora in France will take to the streets of Paris to add their voices to the call for change.