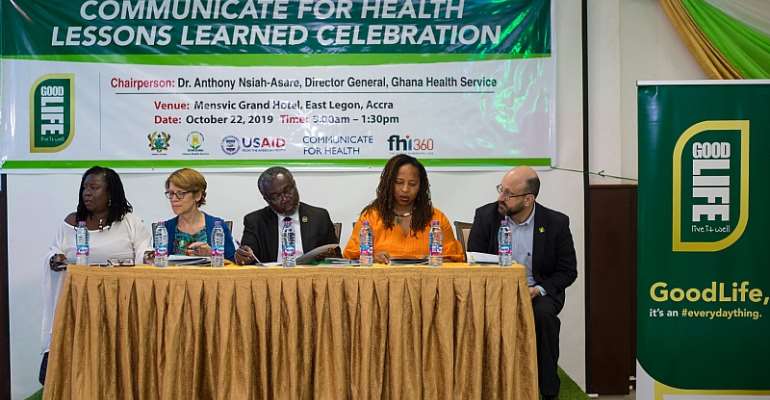 The Ghana Health Service aired 14,900 television and 62,600 radio spots promoting healthy behaviors to improve the health and well-being of Ghanaians. In 2018, the First Lady of Ghana, Mrs. Rebecca Akufo-Addo, officially endorsed the “Slice of Life” campaign, lending her powerful voice to the GoodLife brand. The “Slice of Life” campaign built on the GoodLife campaign by welcoming celebrities and influential figures as participants and spokespersons.

On October 22, the Ghana Health Service and USAID gathered in Accra to celebrate the GoodLife campaign and many other accomplishments at the USAID Communicate for Health learning event. USAID also supported the National Population Council, the Ghana Health Service, and others to develop three seasons of the hit series “You Only Live Once,” an educational and entertainment drama series promoting positive health behaviors directed at youth, including reproductive health, malaria prevention, and nutrition. Its positive living messages successfully trend in social media platforms among the youth in Ghana. The series currently has 12 million views on YouTube and increases daily. One youth noted, “Overall, if there's any youth edutainment show on TV now, it is YOLO. It is so refreshing and informative.”

She congratulated all partners present, including the health promotion officers, community health officers, and community health volunteers who work tirelessly to bring health messages to each doorstep in Ghana. USAID and the Ghana Health Service Health Promotion Division (HPD) worked hand in hand to make this project a success. From 2014-2017, USAID supported the renovation of the HPD office space, including a theater which is now rented for income generation.

In April 2019, with USAID support, HPD launched the National Social and Behavioral Change Communication Resource Center, an electronic library with hundreds of television, radio, and print materials produced in Ghana. The center also serves as a repository of information for the generation and dissemination of future social and behavior change communication materials.

Social and behavioral change drive healthy behavior, and healthy citizens are productive citizens. Simon, a fisherman from Avate Tornu in the Volta Region, heard a GoodLife radio program, which pushed him to construct a latrine for his household to avoid open defecation. Since constructing the latrine, diarrhea has significantly decreased in his household. “It is only when the messages are put into practice that the GoodLife can be truly realized.”