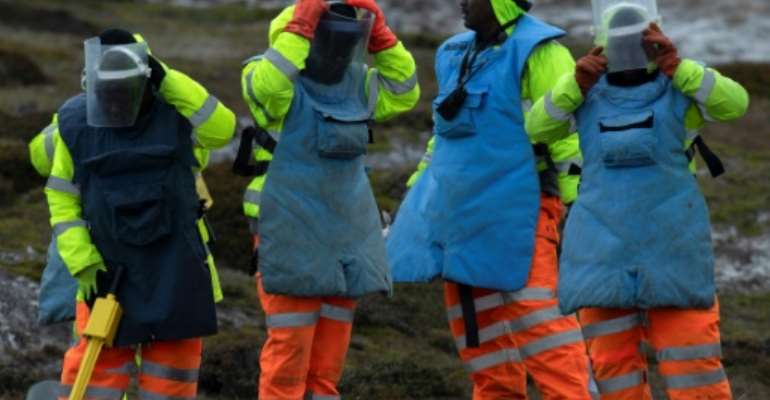 Zimbabwean citizens work as expert deminers, clearing the 25,000 mines laid by Argentine troops during their 74-day occupation of the Fakland Islands in 1982. By Pablo PORCIUNCULA BRUNE (AFP)

"There are over 100 minefields flung all across the Falkland Islands from Fox Bay, Port Howard, Goose Green, Fizroy, Stanley area, Longden, all over the place," said John Hare, the technical director of SafeLane Global, which has been contracted by the British Foreign and Commonwealth Office to clear the mines.

The Argentine army laid around 25,000 mines during their 74-day occupation of the remote British overseas territory in the South Atlantic. For the past decade, expert Zimbabwean deminers have been charged with clearing the fields.

When the war ended in 1982, the Argentines handed over their records.

Since then, demining teams have undertaken the painstaking process of trawling through the documents, sourcing background information from locals and probing into minefields for evidence of potential explosives.

Only once that was done did the deminers start clearing the explosive devices.

"The Zimbabwean deminers are experts in this job. We've been doing this for quite a long time, most of us are in our 21st year doing this job," Michael Madziva, the site supervisor, told AFP about his 100-strong team.

A surprising community of around 100 Zimbabweans can be found on the Falkland Islands, where they have been a familiar and welcome sight since 2009. By Pablo PORCIUNCULA BRUNE (AFP)

Back in 1999 a company called Bactec, which was one of several to later merge into SafeLane Global, was contracted to clear two million mines along the border between Zimbabwe and Mozambique.

Local Zimbabweans were recruited and trained, and they have since become world-renowned for their expertise.

"Since 2015, I've had basically the same group of deminers," said Hare, who used to be a bomb disposal expert with the Royal Engineers.

"They're... a really great group of guys to work with."

The Zimbabwean experts have been deployed all over the world -- including to Afghanistan, Iraq, South Sudan, Eritrea, Croatia and Lebanon -- to clear mines following devastating conflicts.

"What made them good deminers is they love their job," added Madziva.

There were originally 122 areas to clear in the Falklands, but there are only 11 to 12 left. The project, which began in 2009, is expected to finish by the end of next year, according to Guy Marot, who heads the Falkland Islands Demining Service Program.

The group is currently working on a beach close to the Falklands capital Stanley, where Argentina expected British troops to land. Instead, they arrived on the other side of the East Falkland island at San Carlos.

Once located by a huge digger that sifts through the sand, the mines are either disarmed on the spot and then transferred to a quarry to be burnt, or those that are too dangerous to move are destroyed on the spot by explosives.

Zimbabwean Jonas Muza quit demining in 2015 and settled in the Falklands. By Pablo PORCIUNCULA BRUNE (AFP)

Even though it's a long way from home, some deminers went on to settle in the Falklands.

Jonas Muza, 41, quit demining and moved to the Falklands in 2015. His wife Anna joined him a year later, and he's expecting to bring his three daughters over next year.

"I liked it before even I came here. I liked the place because of the weather," Muza told AFP.

"I was thrilled to see snow for the first time."

Anna, who works as a kitchen assistant in the deminers' group accommodation, wasn't quite so enamored.

Deminers work in the Falklands from September to June, but Muza wanted employment all year round, so he found work fitting tires instead.

"In demining, when the contract finishes, it's obvious you are unemployed until another job comes your way. I didn't like that. I wanted constant income so I can sustain my family," said Muza.

Although his children -- Nathalie, 17, Keisha, 11, and five-year-old Kiara -- have been enrolled in school for the next year, Muza doesn't see the Falklands as a permanent home.

"I will go back some point in the future," he said. "Like they say, home calls you. East, west, south: home is home."

ASEPA petitions Akufo-Addo for names of members on committee...
13 minutes ago