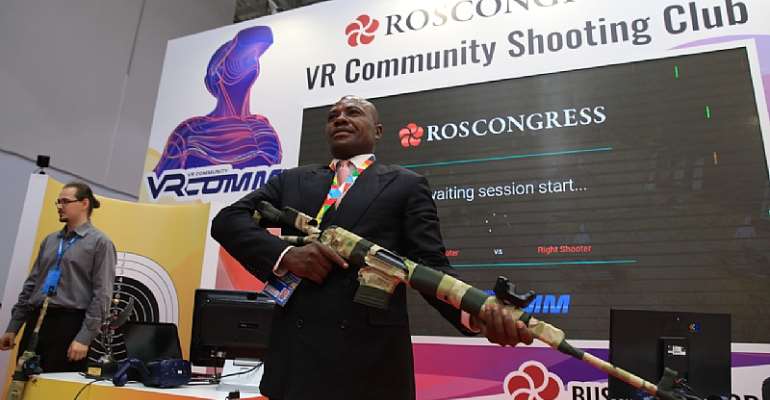 The Innovation Space is holding an exhibition as part of the Roscongress Foundation’s Building Trust Area at the Russia–Africa Economic Forum on 23–24 October. Fourteen high-tech Russian companies whose technologies have good prospects on African markets are presenting their projects at the exhibition.

Gazprom is the general partner and Aksioma is the partner of the Innovation Space at the Russia–Africa Economic Forum.

Visitors to the exhibition will be able to personally try out various interactive exhibits. In particular, the company Intelligent Scanning Systems, which is a participant in the Roscongress Foundation’s Business Priority project, has opened a virtual shooting range with full immersion and the use of weighted hunting rifle models at the VRComm booth. As part of the Roscongress Sport Club, participants will be able to shoot at moving targets from multimedia machines. VR technologies will also create the feeling of being in the African savannah or Russian forests. Each player’s results will be recorded in the overall standings and the most accurate shooters on the second day of the Forum will receive commemorative prizes from the Roscongress Foundation.

VR teleportation, another project being implemented by Intelligent Scanning Systems, offers a unique opportunity to visit and learn about the history, infrastructure, and capabilities of any city or site without physically going anywhere. Users interact with the platform through portable or stationary VR-devices, and in the future they will be able to do so via a mobile phone.

Bionovatik, a major Russian innovative company that manufacturers and introduces biological products for crop production, will show off a line of its most popular products at the Innovation Space: growth regulators, biological fertilizers, biological fungicides, and biological insecticides. Another useful product in agriculture is the company AGRATEC BIO’s new generation plant growth bio-stimulator, which increases productivity by 30–50% and does not cause any damage to the soil.

Other exhibitors include Kalancha, which is developing a unique technology for the gas-powder fire extinguishing of tanks with oil and petroleum products; RDP.RU, a leading Russian developer and supplier of high-performance network equipment for telecom operators and service providers; and the World Wi-Fi global decentralized free Wi-Fi network on private routers. World Wi-Fi solutions are already used in a number of African countries: Botswana, Kenya, and South Africa.

All these projects will be presented at the pitch session Business Priority: Perspective, which will be held on the second day of the Forum. Innovative startups will be evaluated by a Business Priority panel of experts, which includes representatives of investment funds, the federal and regional authorities, corporations, large and medium-sized businesses, angel investors as well as delegations from African countries. The session will devote particular attention to the prospects for exporting Russian products to the African continent.

The theme of healthcare, which is represented by two projects in the Innovation Space, was also addressed. The ‘Smart Clinic’ is a new digital format for primary care. In addition, the company Health Source is presenting a decentralized drinking water supply system that uses unique automatic equipment designed by the company.

The Building Trust Area is a unique platform that unites two projects of the Roscongress Foundation – the Innovation Space and the Innosocium LAB. More information on the programme of the Building Trust Area can be found on the official website of the Russia–Africa Summit and Economic Forum.

Reference:
The Roscongress Foundation is a socially oriented non-financial development institution and a major organizer of international conventions, exhibitions, and public events.

The Roscongress Foundation was founded in 2007 with the aim of facilitating the development of Russia’s economic potential, promoting its national interests, and strengthening the country’s image. One of the roles of the Foundation is to comprehensively evaluate, analyse, and cover issues on the Russian and global economic agendas. It also offers administrative services, provides promotional support for business projects and attracting investment, and helps foster social entrepreneurship and charitable initiatives.

Each year, the Foundation’s events draw participants from 206 countries and territories, with more than 15,000 media representatives working on-site at Roscongress’ various venues. The Foundation benefits from analytical and professional expertise provided by more than 2,500 people working in Russia and abroad. In addition, it works in close cooperation with economic partners from 94 countries worldwide.