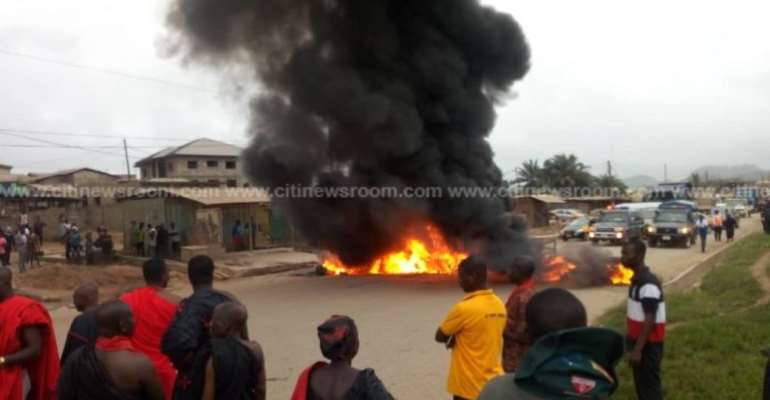 A group calling itself the Concerned Citizens of Wassa Fiase in the Western Region has called on President Akufo-Addo to among other things, give a directive for the immediate construction of roads in the area.

The group indicated that a huge chunk of Ghana's mineral revenue comes from Wassa Fiase, yet there's nothing to show in terms of development.

The reason for the under-development in the area, according to the group, is because they have been neglected by the NPP government.

Addressing the media in Accra, Chairman of the group, Onyameba Attah Kesson threatened to withdraw the roles the area plays in generating revenue for the country if Akufo-Addo does not solve their problems.

“Though Wassa Fiase contributes about 40% of Ghana's revenue, its roads are in such a deplorable state. That it is very risky to drive on them. The MCE of Tarkwa Nsuaem Gilbert Asmah who does not hail from Wassa Fiase has demonstrated a clear lack of interest in the development of our area. It is very unfortunate that Wassa Fiase particularly Tarkwa Nsuaem constituency which is a world bank of votes for the NPP government has been neglected by the NPP.”

“Well, we hope that the NPP will take notice and learn from how our good brothers and sisters of the Volta Region decided not to be a world bank again for the NDC when they were neglected. We, therefore, call on the President to direct for the immediate construction of our roads,” he said.

He said that the traditional area has over the years had chieftaincy issues, with some chiefs being enstooled and gazetted through unlawful means.

“The current Minister obviously has had several meetings and interactions with the chiefs of Wassa Fiase. Some of the interactions are still ongoing but we are reliably informed that some of his interventions are not assisting to find a solution. That is why I am calling on the President for him to look into that,” he continued.

Tarkwa Nsuaem, an area close to Wassa Fiase has been in the news for over a year now, following several demonstrations over the poor state of their roads.

The most recent incident involved the Police in the area arresting some residents for attempting to defy a court order barring them from proceeding with a planned demonstration over the poor nature of the Tarkwa -Ahwitieso road.

The planned protest was in defiance of a restraining court order secured by the Police.

Those arrested included the chairman and secretary of a group calling itself the Concerned Citizens of Tarkwa-Nsueam, as well as the bandsmen who were there to provide music.

Meanwhile, the Member of Parliament for the area, George Mireku Duker, has assured residents that measures are underway to fix the deplorable Tarkwa to Takoradi road.