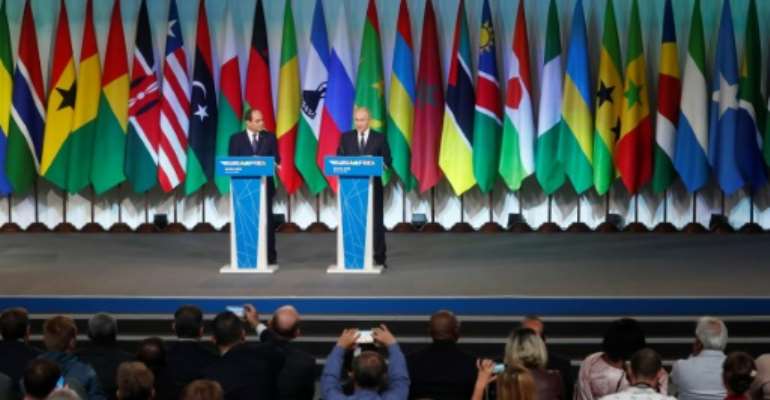 The first ever Russia-Africa summit was hosted by Russian President Vladimir Putin and his Egyptian counterpart Abdel Fattah al-Sisi. By Sergei CHIRIKOV (POOL/AFP)

Aboubakary Guiro, a financial expert from Ivory Coast, is full of hope after attending the first ever Russia-Africa summit this week in the Black Sea resort of Sochi.

"We forget about Russians when we talk business," said Guiro, the co-partner of a financial advisory firm based in Abidjan.

"We think about the EU-USA-China trio," he added, pointing to a number of psychological and language barriers.

"From now on we will be much more open."

President Vladimir Putin pulled off a major feat bringing together delegates of all 54 African states for the summit on Wednesday and Thursday.

At the close of the meeting, Putin hailed a "new page" in relations.

"We want to strengthen economic co-operation," he said, reiterating his aim to boost Africa-Russia trade turnover to $40 billion (36 billion euros) within five years.

Kalashnikov rifles were on display on the sidelines of the first ever Russia-Africa summit. By Sergei CHIRIKOV (POOL/AFP)

Moscow was a crucial player on the continent in the Soviet era, backing independence movements and training a generation of African leaders.

Today the Kremlin is hoping to rekindle Soviet-era relationships and build new alliances.

It wants to hold an Africa-Russia summit every three years.

The gathering was a colourful affair, with some African participants flaunting traditional fabrics and headdresses in contrast to the black-suited Russian delegates.

For Guiro, it was a great way to make a "first contact".

"The contracts, if there are any, will only come in one or two years."

But Guiro said Russians should also "come to Africa," adding that Russia has been virtually absent from francophone countries except for aluminium producer Rusal which has mining interests in Guinea.

Russia has used a traditional combination of debt relief, arms supplies and defence expertise to expand its footprint in Africa.

But in recent years Moscow has also sought to make use of soft power tools such as multi-lingual state media and various funds to promote its influence on the continent.

President Vladimir Putin pulled off a major feat by bringing together delegates of all 54 African states. By Sergei CHIRIKOV (POOL/AFP)

This year Konstantin Malofeyev, a Russian Orthodox businessman with ties to the Kremlin, helped set up a development agency to assist the governments of Russia's partner countries.

The International Agency for Sovereign Development (IASD) set up a huge stand on the sidelines of the summit.

Its booklet said, in four languages, that the outfit's top goal is to help countries, especially in Africa, "attract investment and "unlock their growth potential."

The US and Ukraine have accused Malofeyev of helping bankroll separatists fighting against Kiev forces in eastern Ukraine.

Alexander Malkevich, a Kremlin-connected media manager, was another prominent presence at the summit.

Malkevich, head of the Foundation for the Protection of National Values, hosted a roundtable discussion which saw speakers including the defence minister of the Central African Republic, Marie-NoÃ«lle Koyara, denounce the influence of "former colonial powers."

Malkevich, who last year was put on a US sanctions list for attempted election interference, said his foundation conducted research in Africa.

"We try to help Russian business establish in Africa," he told AFP. "We know who is who."

But critics caution that people like Malkevich may be Kremlin agents of influence.

This year two employees of the foundation were detained in Libya over election interference attempts.

Malkevich is believed to have links to an infamous troll farm and used to edit an English-language website which tried to stage a rally in front of the White House.

The US Treasury Department said the site posted content which was "generally ridden with inaccuracies."

And the demonstration he sought to organise? "It was a joke," he said.

FixingTheCountry Movement to march in support of Akufo-Addo'...
1 minute ago