How Serious is Attorney General Gloria Akuffo in Helping Build a Better Ghana? 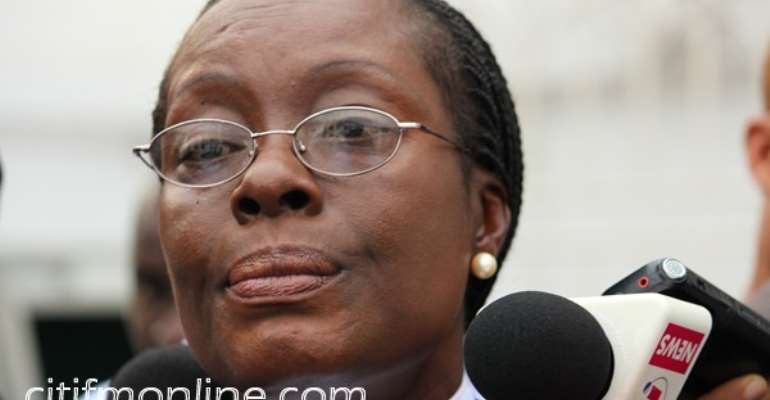 Ms Gloria Akuffo, being part of the Ghana judicial system by virtue of her position as the Attorney General and Minister of Justice, has a major role to play in building a just and prosperous Ghana. Understandably, without the respect for, and enforcement of, the laws, no country can prosper to the admiration and expectation of her citizens.

Therefore, anyone put in charge of ensuring that laws are enforced and obeyed, must be seen to carry the success of the country on their shoulders. They can make or break the country upon the fact prosperity does not thrive in lawlessness and even if it tries to, it is only for the benefit of a few criminals.

Since Ms Gloria Akuffo was appointed to that post, I can personally say without fear or favour that she is underperforming. She does not make many people proud because of her failure to chalk successes to commensurate President Nana Akufo-Addo's promise to eradicate official corruption from Ghana. She is clearly a misfit in that position as far as I can see.

She is making matters worse by her deliberate attempts to put brakes on the Special Prosecutor. Without her assistance and consent to facilitate the job of the Special Prosecutor, Hon Martin Amidu has been reduced to a public ridicule after all his bravado to deal mercilessly with corrupt politicians and corrupt public servants.

The Attorney General has not made any major prosecutions to endear her to the Ghanaian public. Also, there appears that she is not allowing the Special Prosecutor to do his job. Why is that so? Is she not sabotaging the president without him not knowing?

If she was doing a credible job, why has she or her outfit not been able to seriously prosecute the murder case of the late Member of Parliament Joseph Boakye Danquah Adu and the retrieval of the €47 million (Euros) from Waterville Company of which Alfred Agbesi Woyome, the swindler of 21st Century Ghana is associated? The €47 million was paid illegally to the company hence the Supreme Court pronouncing a judgment in favour of the State (Ghana) to collect the money back from the company.

What at all is she doing in the post of the Attorney General? Did the president make an error of judgment by selecting her for the post because she was once a member of his legal team during the 2012 Supreme Court suit over the election results? Was she appointed on merit or on some "whom you know" modality?

The stagnation in developing Ghana emanates from the scarce resources being embezzled by the politicians and those in the civil service entrusted with power to run services for the collective interests of the citizens. Unless these acts of corruption are stopped, Ghana will never find the needed money to develop the nation. Ghana can only find the money when the corrupt officials are found, prosecuted and convicted to fines or prison terms. However, here is the case where she who is to ensure that these officials are prosecuted is sitting on her backside doing fuck all but frustrating the Special Prosecutor to render him equally impotent.

As the few criminals continue to steal Ghana money and commit crimes without impunity, with the Attorney General unable to bare her biting teeth at them, lawlessness able to retard the progress of Ghana will forever be the order of the day.

It pains me to see all my efforts made, alongside that of many other Ghanaians' to bring Nana Addo and NPP to power going up in flames because of incompetent Government appointees, including the Attorney General. Many criminal cases are not being prosecuted at the speed needed to bring sanity into the country to propel Ghana into proper socio-economic development.

So far, the Attorney General is not helping to build, but rather, is sabotaging, the development of Ghana. Under her watch, the crooks have been left off the hook to practise their trade without restrictions or fear.

Many a Ghanaian sees and concludes that His Excellency Nana Addo Dankwa Akufo-Addo has failed totally when it comes to fighting corruption. This is all because of a doubtful person appointed as the Attorney General. Could she not be replaced?