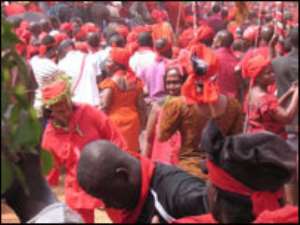 In today's Ghana, and in every city, town or village, many people are dying of various illnesses every month. The alarming rate that Ghanaians are burying their dead on monthly basis defies any known reasons that our medical and other health experts have so far pronounced.

When I was growing up in Kumawu in the Ashanti region, it would take six months or a year for you to hear of someone dying. It was not common for people to die. Because it was not an usual occurrence, whenever we heard of a car from Kumasi driving past honking its horn continuously, an indicative of a dead body in the car, many people would rush out of their homes to catch a glance, inquiring who the dead person could be? At times, the dead person might not be from Kumawu itself but one of its satellite villages. Such was how people lived longer in those days.

However, Kumawu like many towns in Ghana today, buries from between twelve to fifteen people a month. Ouch!

Much as I understand that the population has increased remarkably, the percentage of death as taking place today is way higher than it was in the 1950s to end of 1970s or mid 1980s. The population has not increased tenfold but the death rate has increased about twentyfold. What could be causing that overwhelming number of deaths among the inhabitants of Kumawu in particular and Ghana in general?

Many Ghanaian experts of all categories, be they qualified medical doctors, self-styled experts or whatever they are, have been coming up with explanations as to why many previously unknown diseases are now tormenting and killing Ghanaians. They have been telling Ghanaians that the diseases and deaths emanate from the food we eat and when we eat them.

They keep hammering on the dangers of eating meat, thus, beef, mutton etc. Some are warning us against eating smoked meat, smoked fish, etc. They claim during smoking of the meat or fish, the smoke coming out of the fire caused by the oil from the meat or fish coming into contact with the fire becomes carcinogenic. Therefore, consumption of such meat or fish causes cancer to their consumers. We are also advised against late evening eating habits and especially, eating "fufu", the Akan staple, after 6pm. Fufu must eaten at around 3pm by the latest, they admonish. We are advised to eat more vegetables but less carbohydrates.

I cannot enumerate all the warnings and advices being given for the Ghanaian to stay healthy and live longer. Cutting back on sugar and salt consumption is suggested for our good health.

My worry is, in all those years that the Ghanaian was living longer and healthier, they were eating their fufu, smoked meat and fish and red meat. They were eating their green "nkontomire" (cabbages), garden eggs, etc. but not any or much of carrots, cucumber, broccoli, cauliflower, lettuce, asparagus. They had their own leaves used for "abem duro" of which most of the city dwellers had no easy access to yet, they all lived longer. What then has gone amiss in today's Ghana that people are dying younger in their greater numbers with real and quack doctors advising us to eat more of the listed Whiteman's vegetables to live a bit longer?

Could the numerous diseases like cancer, diabetes, high blood pressure, typhoid fever, cholera, etc. killing the Ghanaian or the African today, not to do with other causes not yet known to us? Have we by the way looked at, or ever thought of, any secret agenda by some people to eradicate us from the surface of the earth to enable them repossess our land and its natural endowments? Does our cultivated habit for consumption of foreign foods or edible products and materials not be a major contributory factor towards the numerous fatal diseases and deaths confronting the Ghanaian?

Imagine the health hazards associated with the plastic rice, plastic fish and lead-contaminated sugar as was sent to Kenya by the Chinese. Do they not have fatal effects on their consumers in the long run? Ghana imports billions of US dollars worth of rice and other food items every year. If the food products are contaminated, do we have the means to detect it? NO!!! Will such contaminated foods not cause illnesses and death to the consumers?

Once, sachet water was unknowingly the number one source of typhoid fever. And typhoid fever is a killer disease. I published articles about it. The government took measures to inspect and control where the sachet water are made. However, they may still not be 100% contamination-free. Every Ghanaian, despite which corner they find themselves in, will like to drink sachet water. No wonder the many unexplained deaths taking place in the country to the shocking of serious thinking Ghanaians.

The unsanitary state of our cities and towns, with rubbish strewn everywhere, in the gutters, by the markets etc., gives rise to diseases of all kinds to culminate in the deaths of people.

The unprofessional application of herbicides to our food crops especially tomatoes, can cause cancer to the consumers. Some of our young tomato farmers in quest for quick money will apply chemicals to green tomato fruits to get them ripen within two hours. The exterior of the tomato will be red while the inside is as green as a green leaf. If that tomato is not washed properly before preparation for consumption, will it not cause health hazards to the consumer?

What about the open defecation by some people in our cities and towns? When contaminated faeces are transported by houseflies onto the food that we eat, will it not cause illness to people?

Last but not the least, the unhygienic conditions and environment that some of our public foods are prepared gives cause for concern. The insalubrity of the area with the workers' dirty personal hygiene is a likely cause of diseases, illnesses and death to fragile people.

I know that processed meat, excessive consumption of sugary foods etc., are causes of cancer and diabetes. But how many of the Ghanaians dying in their greater numbers on monthly basis have uncontrolled access to sausages, thus processed meat, and sugar, as it is in the Whiteman's land? Therefore, the causes of the numerous diseases afflicting Ghanaians must be well researched rather than swallowing the reasons offered by the Ghanaian experts line, hook and sinker.

Since I was born, I came to find Ghanaians eating smoked fish, smoked meat and red meat but they were living longer. What has happened that we are now being warned against the consumption of such food items because they cause cancer, diabetes, strokes etc.?

What then are the real causes of the many diseases and deaths tormenting Ghanaians on monthly basis, dear fellow Ghanaians? Lest I forget, what about the fake, expired and contaminated medicines imported into the country by some foreigners and Ghanaians alike? Such drugs are killers ooo! Galamsey contaminating our water bodies with mercury etc. is a silent but sure mass killer.

Let us have serious intellectual debate about why Ghanaians are dying at a terrifying rate. Some people have a secret agenda to control our population through gradual extermination but our corrupt leaders cannot figure this out.