... Lists the acceptance of Russia to return to complete and Commission the abandoned Ajaokuta Steel Rolling Mill to kick start the industrialisation of Nigeria and 12 other Take-Aways as most significant
By Nwaorgu Faustinus 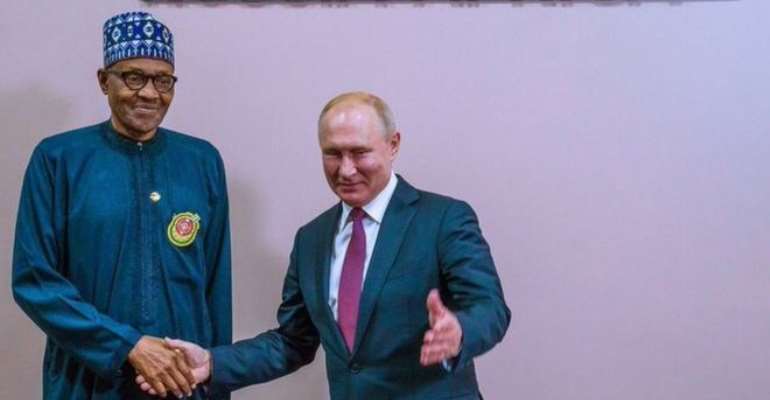 Prince Tonye TJT Princewill an APC chieftain in a statement he issued described President Muhammadu Buhari's current outing in Russia as a harvest of goodies for Nigeria.

According to the Prince of Niger Delta Politics, "I want to congratulate Mr President and his team for what they have achieved in Russia. Coming a few weeks to this year’s Christmas celebrations, permit me to call him Baba Christmas. The fact that the journey to a next level has already begun is now clearly obvious.

Those who displayed their ignorance of how world trade and politics are played by going on record to say that Buhari need not go to Sochi but should instead stay at home and solve the problems of decades sitting back in the villa, must now be hiding their collective heads in shame. To see and hear all that Mr. President has achieved in Russia should impress even his harshest critics - if they have a conscience of course.

As I scrolled down the 13 different agreements that were reached, I couldn’t help but feel a deep sense of pride at the amount of effort and teamwork that must have preceded the visit and the different areas of the country and the economy impacted by them. My single biggest emotion though was relief. Because of the top three priorities we need as a country, which are Jobs, Jobs, Jobs. I see millions of jobs from this visit alone. But as with so many agreements, meetings, summits and presidential visits, follow up is key. With a new cabinet that has results to deliver and a more collaborative legislature however, I see few challenges to a positive outcome.

As I scrolled down the 13 areas of agreement reached and compared it with reports from the other 4 countries that were specially invited to Sochi, it became obvious that Egypt that had a whopping 40% of all Russian investment to date were about to share the same space of prominence with Nigeria as it was clear that there was a pivot to our own dear fatherland by Russia. Add that to the clear and present preferred destination status for the Chinese investment and you will see that the future is getting brighter. This opportunity is a direct product of a government that has now instilled a new uncommon confidence in international investment. A summary of the trip as put out by Garba Shehu is as follows:

1. They agreed to see to the rehabilitation of epileptic oil refineries through establishment of framework for a joint venture between Nigerian National Petroleum Corporation (NNPC) and Russia-based leading oil company, Lukoil

2. Both NNPC and Lukoil will work towards prospection of oil in deep offshore.

Nigeria and Russia also agreed to revive and solidify the venture between the NNPC and Russia’s gas giant, Gazprom, for the development of Nigeria’s enormous gas potential and infrastructure.

Earlier, the Minister of Mines and Steel Development, Olamilekan Adegbite had a very fruitful discussion with his counterpart in Russia on Ajaokuta.

4. The Russia government agreed to support development of Nigeria’s rail infrastructure by constructing 1,400 kilometres track from Lagos to the South-South city of Calabar.

5. There was also discussion on the advancement of ongoing project for the establishment of a nuclear power plant in Nigeria. According to President Putin, the next step in the implementation of the project should be the commencement of construction of a power plant.

On security and military cooperation, one that existed for fifty-nine years of Nigeria’s independence,

6. Baba Christmas agreed to renew Nigeria-Russia Military Technical Agreement that had lapsed within a short time, saying: “I have directed the Minister of Defence to work with the Ministry of Justice to conclude this matter within the shortest possible time.”

This military cooperation agreement is expected to give impetus to further cooperation in direct procurement of military hardware on a government-to-government basis at a lower cost as well as training of military personnel and modernization of armed forces and renewal of infrastructure and equipment which President Putin promised to undertake.

7. On the protracted issue of the Aluminum Smelter Company of Nigeria (ALSCON) Ikot-Abasi, Akwa-Ibom State, President Buhari said that he had asked the Ministry of Justice, “to submit a comprehensive report on the UC Russel (the Russian owners of the plant) matter...I want to assure you that the aim of our reforms is to ensure such investments are concluded and actualized in a professional and painless manner.”

The two Presidents also addressed partnership in education and agriculture.

8. In education, the Russia leader said as a first step they would give additional scholarships to Nigerians.

9. In Agriculture Baba Christmas said, “We seek your Government’s support especially in the areas of wheat production. Today, Nigeria produces less than one hundred thousand metric tons of wheat locally while our imports are projected to exceed five million tons in 2020. We therefore need your support to bridge the deficit which will create jobs and save our foreign exchange for other important areas like security, defence and infrastructure.”

On this, President Putin promised to promote joint efforts, given his country’s ranking as the current number one wheat producer in the world.

“We can do a lot together,” Putin added.

Putin promised his country’s support for the geological prospection of Nigeria’s solid minerals.

11. Putin also gave assurances of working with Nigeria and other African countries to secure and stop the incidents of piracy in the Gulf of Guinea as they did in securing the Somali coastal areas.

13. To move forward may I suggest that our countries organize the fifth Joint Commission meeting to review and ratify all the agreements (about 40) contained in the Intergovernmental Nigeria-Russia Joint Commission on Economic, Scientific and Technical Cooperation Protocol of November 11, 2016.”

President Putin agreed to the proposal.

Both leaders emphasized the need for reform of United Nations Security Council. On that point, President Buhari asked Russia to support Nigeria’s aspiration for a permanent membership of the council.

“The trip was a diplomatic masterpiece, a rebuff to those ignorant of the duties of a President of a country asking him to ignore the invitation. He is the No 1 Diplomat of His country and no diplomat stays in one place and expects good relationships with other countries. He is the Chief Sales Officer of his country and there’s no salesman who stays in his company and expects to make greater sales. He is the Chief Public Relations Officer and Reputation Manager of his country, again no Public Relations officer would stay back and expects any good relationships with sister countries. With the damage to our reputation from corruption, crime and the self afflicted injuries of PDP’s 16 years of misrule, we can’t expect the President to stay in one place and think that things will improve. In any case what are the results of Mr President’s diplomatic forays? From China we have the Railways, Mambilla Dam and better Airports. From Germany, Siemens power interventions. From South Africa better protection for our citizens. From Saudi Arabia and the Middle East we have the Sukuk bond. The list goes on. What are the benefits of such negativity other than further erosion to our name and image? This is something the President is working very hard to correct. I support him. I suggest we all do same”, Princewill appealed.