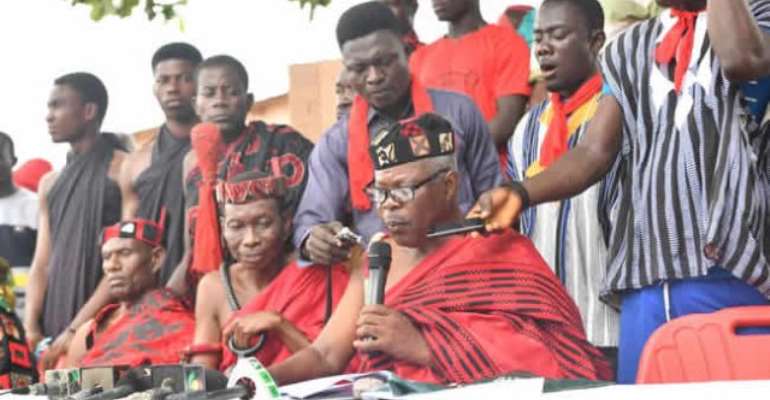 Divisional chiefs at Manya Krobo in the Eastern region have accused their paramount chief, Nene Sakite II of abuse of power.

According to them, Nene Sakite II has disregarded all the customs and traditions of Krobo land and instead of using his position to promote peace and unity among his people, has rather courted for himself needless litigations.

At a press conference Thursday, a representative of the chiefs Nene Okpatakplah Sasraku said, “Konor Nene Sakite II is ruling without consulting the Divisional chiefs who constitute the standing committee of the Manya Krobo Traditional Council.

“In [he is]effect ruling as a dictator and an autocrat with a small group of sub-chiefs, making the traditional council a rubber stamp.”

The chiefs accused Nene Sakite II of giving authorisation to a Kuwaiti national to excavate the Krobo Mountain without consulting the Manya Krobo people, Asafoatseme, Queen Mothers, and Traditional Council.

According to them Nene Sakite II, singularly signed and authorised without a permit and allowed foreigners access into the virgin ancestral home of the people of Manya Krobo Traditional area, was a grave act of sedition which merits the ultimate sacrifice in the land of Manya Krobo.

“Our ancestral burial chambers were all dug out and exposed to the elements and valuable ornaments were stolen.

“Huge quantities of ornaments, beads, pottery, artifacts, ancient tools were all dug out and carried away at dark to an unknown destination for the selfish interest and profit to Nene Sakite II and the Kuwaiti surrogate,” Nene Okpatakplah Sasraku said.

Joy News’ Kofi Siaw reported that the chiefs want Nene Sakite II out and for Manya Krobo states to revert to pre-Konorship Council which ruled the Manya Krobo people for over 500 years.

They appointed Aklomuase Nene Okpatakplah Sasraku IV as acting President of the Interim Manya Krobo traditional council until the completion of the legal statutes to formalise the Paramountcies and all statutory structures.