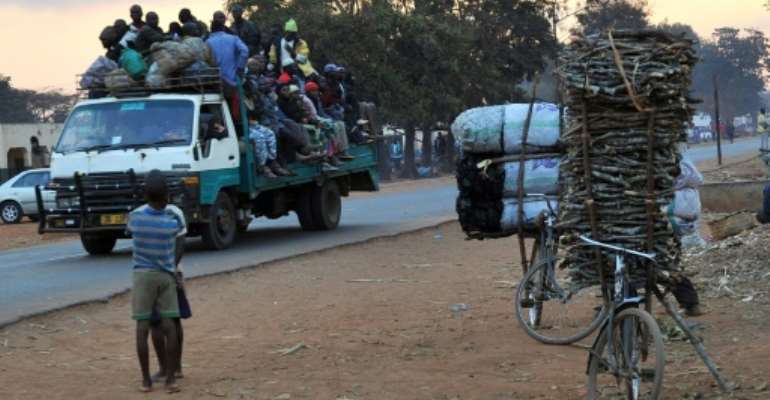 The fuel shortage has forced many Malawians to cycle. By ALEXANDER JOE (AFP/File)

A pay strike by truckers in landlocked Malawi has crippled oil and power supplies, leading to prolonged blackouts and fuel shortages on Thursday.

Over 1,000 truck drivers stopped work from Monday, preventing all lorries from entering and exiting the country's borders with Zambia, Mozambique and Tanzania.

Their leader Richard Jubeki said the drivers are demanding a giant wage increase to push monthly salaries from the current $40 (35 euros) to $450.

"We have closed all the borders across the country for trucks to try and force our employers to increase our wages," Jubeki said.

As of Thursday morning, government and trucking companies' representatives were still locked in negotiations.

An outcome is expected soon as Malawi relies on road transport to move goods mainly from the ports of Dar es Salaam in Tanzania and Beira in Mozambique.

By Wednesday, the effects of the strike were felt by the 18 million population, particularly in the capital city Lilongwe where motorists were stranded after fuel stations ran dry.

"I spent the better part of today driving around the city looking for petrol but I have been unsuccessful. This is not on," Lilongwe resident Patrick Banda said.

The protest has also disrupted power generation as the Electricity Supply Commission of Malawi (Escom) sources some of its power from diesel-powered generators.

The company said its tankers carrying diesel from the National Oil Company of Malawi (NOCMA) fuel depot to diesel generators were barred from passing through.

"Massive load-shedding will result," it said in a statement.

Most parts of the country experienced 8-hour long blackouts on Wednesday.

But spokesman Telephorous Chigwenembe said the responsibility of ensuring that this fuel is available to on the market rests with the power regulatory body -- the Malawi Energy Regulatory Authority.