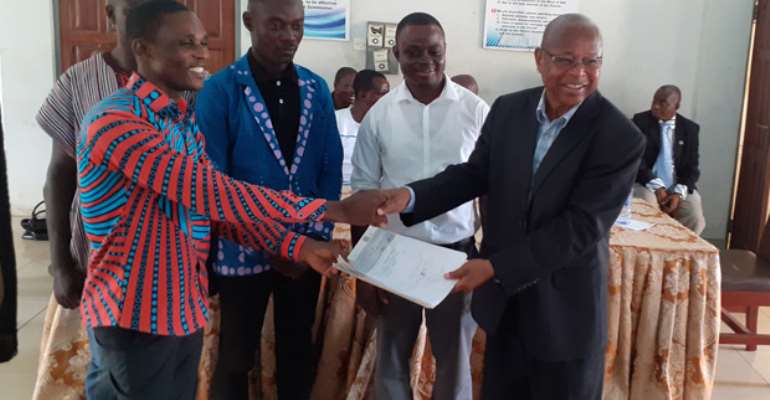 The MP in a suit presenting a cheque to one of the beneficiaries.

About 105 five students from the Ho Central Constituency who have challenges in financing their education have benefitted from bursaries from their Member of Parliament (MP), Benjamin Kpodo.

The bursary which amounts to over GH₵61,000 serves as partial scholarships to support students for the 2019/2020 academic year in the various tertiary institutions across the country. This brings the number of beneficiaries from 2013 to date to over 500, according to the MP.

He explained that although the initiative originally included beneficiaries from the second cycle institutions, the introduction of the Free SHS policy by the NPP government has limited it to only tertiary institutions

He also noted that the idea of the partial scholarship was to allow for more beneficiaries to be served since the number of applicants far outweighs the beneficiaries. Beneficiaries were encouraged to reapply yearly should they want to be enjoying the support till completion of their studies.

Mr. Kpodo who became MP in 2012 indicated that the support comes from his allocation of the MP's Common Fund and appealed to the students to study hard to justify the support they are enjoying.

The Ho Municipal Chief Executive (MCE), Prosper Pi-Bansah commended the initiative which he said was complementing the Free SHS policy to help students climb the academic ladder beyond the second cycle level. More so, he indicated, complements the government's scholarship scheme, which he recently approved GHC82,000, to support 32 beneficiaries in the municipality.

He urged the beneficiaries to put in all efforts to succeed in life and return to give back to the constituency and the municipality. According to him their support in future will also give another opportunity to others who may find themselves in similar conditions later.

The beneficiaries thanked the MP for the support and assured that they would study hard and show themselves worthy of the support. They also called on other citizens and philanthropists to support the MPs initiative to increase the bursary amount and number of beneficiaries.