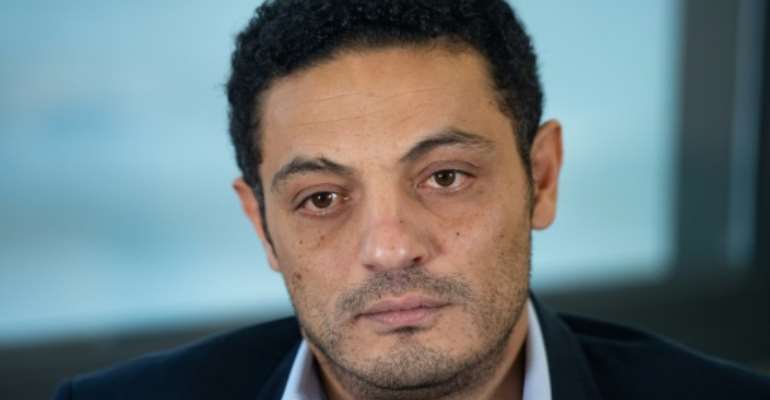 An exiled Egyptian businessman, who sparked rare small-scale protests in Egypt in September, says he is working with the opposition to topple President Abdel Fattah al-Sisi and calling for fresh demonstrations.

"We will put out a call to the masses but not now ... in about two to three weeks time we are planning on this," Mohamed Ali told AFP in an interview from his austere office overlooking the Mediterranean Sea near Barcelona.

It is from here he has been posting his viral videos that have racked up millions of views in Egypt and briefly translated into boisterous demonstrations by hundreds of people throughout the country on September 20.

"We want to reduce any potential clashes (with security forces) ... The next step has to be measured because I don't want any bloodshed," he said.

Ali, 45, a construction contractor and fledgling actor, burst onto Egypt's political scene with his frenetic, at times comedic and profane, videos.

Furiously smoking Marlboro red cigarettes in rambling 30 minute clips, he has repeatedly accused Sisi and top military brass of wasting taxpayers' money on vanity projects. And he alleges he is owed millions of Egyptian pounds for work he completed but was never paid for.

Although he has failed to produce any concrete evidence, he pointed to specific palaces and villas including in Cairo and Alexandria that Sisi commissioned him to build. His anger struck a chord with Egyptians who have been bearing the brunt of austerity reforms since 2016.

Sisi flatly denied the allegations in September, and insisted the palaces had been built for the country and not for himself.

After Ali urged Egyptians to protest on September 20, hundreds took to the streets in Cairo and several cities such as Suez drawing a heavy-handed response from security forces, who caught by surprise fired tear gas and rubber bullets at demonstrators.

Ali was also caught offguard by the unexpected support, but heartened by the response.

Egyptian businessman Mohamed Aly says he is now working with the Egyptian opposition to topple President Abdel Fattah al-Sisi and is urging fresh demonstrations in the coming weeks. By Josep LAGO (AFP)

"I told people to go out on Friday in a heated moment. Some people even chastised me saying how can you call for a revolution all by yourself?"

In the weeks since, some 4,000 people have been arrested, according to local rights groups, in what activists are calling one of the worst waves of the crackdown against any dissent launched when Sisi officially took power in 2014.

Egypt's attorney general said Wednesday in a statement that scores had been released including "children, students, women and senior citizens" without detailing the exact number.

In late September, it said "not more than 1,000 protesters" had been questioned by prosecutors.

Those detained have weighed on Ali spurring him on now to unseat Sisi, a former general turned president.

"People have been arrested because of me ... This shows the world that under him (Sisi) there are no freedoms," Ali said, sporting a blue blazer, and smoking cigarettes before and after the interview.

"Their arrests deeply sadden me, but they are giving me the drive to push on so they can be released - them and others who have been jailed before," he added.

Security remains tight in Cairo, where the government has kept up a crackdown on dissent since the military ousted former Islamist president Mohamed Morsi in 2013. By Mohamed el-Shahed (AFP)

Since ousting Islamist leader Mohamed Morsi in 2013, Sisi has moved to crush opponents and an ongoing wide-scale crackdown has seen thousands of Islamists, secular activists and even bloggers and comedians jailed.

A palpable security presence has been stepped up in Cairo since September with police rounding up citizens after randomly stopping and searching people's mobile phone content, AFP journalists witnessed.

Egypt effectively banned protests under a restrictive law in 2013 and a renewable state of emergency remains in force.

'Getting rid of Sisi'

Even though only a few small groups have survived the crackdown, effectively neutralising any challenge to Sisi's rule, the flamboyant contractor has not been deterred from coordinating with them.

"The opposition in and out of Egypt are all with me because we all have the same goal of getting rid of Sisi," Ali told AFP.

"The Muslim Brotherhood welcomed my idea warmly. They are with me and they are my good buddies... I have no problem in announcing this. He (Sisi) has classified them as a terror group but they are also very respectable people," he said.

The Brotherhood was outlawed and branded a terror organisation in 2013, months after Sisi led the military ouster of Morsi.

Pro-government media and celebrities have waged a fierce campaign against both Aly and the Muslim Brotherhood since his videos became popular branding him a drunk and a womaniser intent on sowing chaos.

He has refused to be cowed, even though he claims he still receives death threats from unnamed Egyptian officials.

Ali maintains that he has had no support from top military brass, after speculation that powerful Egyptian security agencies might be behind him.

"The next step is that I'm exposing him (Sisi) before the world. I will let the West know, and all those he receives loans from, where he is spending this money," he said.

And he is counting on Egyptians to heed his upcoming calls for fresh protests.

"I am confident that people will demonstrate ... at first it was anger but now this time the protests have to be real so we can unseat him. People will go down (to the streets) for sure," he said.