I Stand For Hijab 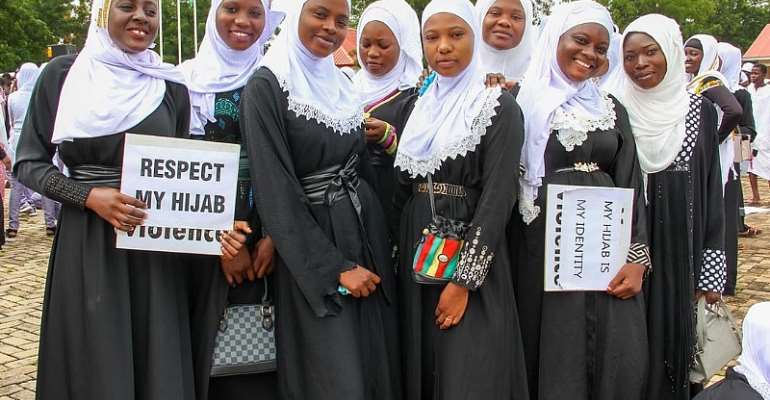 Hijab is a veil or headscarf that is worn by women to conceal their hair. Most often, Muslim women wear it as a symbol of modesty, privacy and above all an obedience to their creator. According to the Holy Quran of Islam and Muslim World, modesty concerns both men and women. The Qur'an instructs Muslim women to dress modestly and the men as well. In recent times, Muslim Women in different parts of the world have experienced unofficial pressure not to wear veil and Ghana is not an exception as a Muslim lady was turn down by SSNIT as a service personnel because she was on hijab as her moral rights. The veil (hijab) has been called a security risk and a "flag of fundamentalism", there have been calls to ban it and it has been associated with terrorism. We are in the era of knowledge and science, and we have the ability to scrutinize religion, demand answers from certain things that are confusion to us. I believe knowledge and science came to liberate us from things that are problematic, and to me personally, I think Islam is not part of the problems and so thus hijab. Is this hijab so important? According to the Islamic perspective it is commanded by ALLAH to the Muslim women, God has introduced hijab as part of the decency and modesty. Quran chapter 33 verse 59 says’’ “This is more appropriate so that they may be known [as Muslim women] and thus not be harassed [or molested].” That is an instruction from Allah to the Muslim women concerning wearing of the veil. And it’s funny how many Muslim women are experience the opposite of this verse as they are been harassed and molested every now and then.

I am not a religious scholar, so I will not have much to talk about the hijab in the religious aspect but rather I will try and analyze its importance’s from the societal point of view. It is an undeniable fact and there are no two ways about that, Men, whether they confess it or not, are slaves of lust and desire, because women are so powerful that most men lost their concentration after seeing a half-naked woman. And most people will agree with me that the women in Hijab is less of attraction to men when it comes to lust. Again, this veil has contributed to the stability and preservation of marriages and families by eliminating the chances of extramarital affairs, yes of course that may not be the ultimate but it is also part of the solution. The most important part, why I love the veil is the fact that, it compels men to focus on the real personality of the woman and de-emphasizes on her physical beauty. It puts the woman in control of strangers’ reactions to her. The today, so called feminists and the Western media often portray the veil or hijab as a symbol of oppression and slavery of women, and it is amazing how knowledgeable and so called intellectuals can actual agree to this weak thinking.

However, one thing that always baffles me is, how somebody will look at his own religious or cultural history and then pass a judgment against another religion or culture, on a lighter note, I will call that an intellectual miscalculation, and, on the harsher side, I will say is a cultural imperialism and foolishness! Things are really changing because, wearing clothes was seen as part of civilization in the past, but today a woman is seen more modernized and civilized when she is almost naked on the street whiles the ones that dressed and modestly covered in hijabs are seen as primitive and oppressed. “One may often wonder if the ‘primitive tribes’ of the past centuries were not more civilized than the rest of the world today. After all, it is the rest of the world which is now imitating the ways of the so-called primitive society in the past.” These things are sad and funny sometimes to agree with. I sometimes wonder how this piece of veil on the woman head is problem to an institutional outputs and the world at large, while miniskirts and half-naked clothes are the vise visa.

Frankly speaking, I am always surprised at a society which shows tolerance towards those who would like to go around half naked but finds it difficult to tolerate women who by their own choices want to put on a veil(hijab). If we all must be truthful to ourselves, we will find out that a woman in the veil is less likely to be sexual harassed or molested by men, but on the contrary, a woman who is half-naked is more likely to be molested and sexual harassed. The practice of displaying pictures of almost naked women in the commercials, billboards, and in the entertainment industry in the west is a true symbol of oppression and I think that is what women and the so called feminists should be fighting for and not women being in their veils. The point of preventing women from wearing the veil is baseless; the hijab has never prevented any woman from acquiring knowledge or contributing to the betterment of the human society.

More Article
ModernGhana Links
Research and development are key to resilient food systems in Africa
Five key reasons why basic income support for poor South Africans makes sense
What Kenya needs to do better as it braces for fourth wave of COVID-19
Nigeria isn't ready to deal with rising COVID-19 cases
Energy will play a critical role in the success of Africa’s free trade area —Damilola Ogunbiyi, Special Representative of the UN Secretary-General for Sustainable Energy for All
The number one priority for African countries is boosting oxygen production to give critically ill patients a fighting chance. Effective treatment is the last line of defence against COVID-19 and it must not crumble
Africa’s strategic priorities to recover better — Cristina Duarte, UN Under-Secretary-General and Special Adviser on Africa
Digital tools can transform Africa, tackle food insecurity
The Goodness of Crocodiles
TOP STORIES