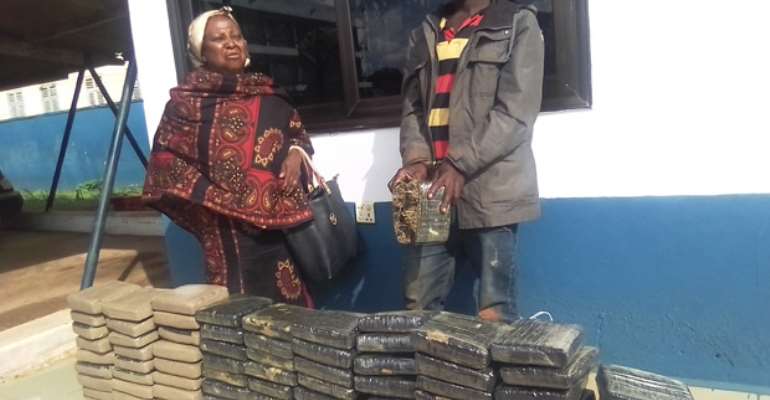 A 71-year-old woman, Abena Abuyaa, and her accomplice, Kwadwo Kinto, alias Ghana Boy, have been arrested by the police for allegedly dealing in Indian hemp or Marijuana, aka Wee, a narcotic substance.

The Bono Region Crime Officer, Chief Superintendent Nana Kwaku Duah, said preliminary investigations had shown that Abena Abuyaa had been in the illicit drug trade for a long time and had been doing it with farmers at Badu in the Tain District.

Her trade partner, whose name she mentioned only as Ataa, managed to escape and the police are hunting for her.

Chief Superintendent Duah said acting upon a tip-off, the police laid ambush at a community called Adentia and arrested Kwadwo Kinto who was carting the Indian hemp on a motorcycle to be handed over to Abena Abuyaa and Ataa.

He said Abena later confessed to the police that the consignment belonged to her and that she was conveying it to Takoradi for onward distribution.

The regional crime officer thanked the United Nation Office on Drug and Crime (UNODC) for providing the police in the region with logistics (vehicles) to enable them to go after the drug trade which is prevalent in the area.

He appealed to the public to furnish the police with information that would help smoke out drug dealers in the Tain District, promising to keep their identities secret.

Detective Chief Inspector Adams Yahaya, the Commander in charge of Drug Unit of Ghana Police Service, said the fight against the drug trade in the district was becoming difficult because the natives don't see it as a crime.