NDC Indicate It's Disaproval Of CSE In 2020 Manifesto – Mahama 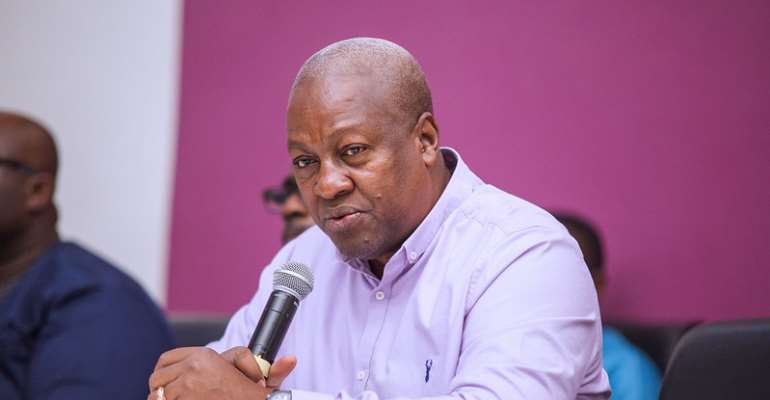 Ex-President John Dramani Mahama has reiterated his disapproval of the controversial Comprehensive Sexuality Education (CSE), saying that his party's manifesto would feature its official stance against it.

Like the former president, many have raised questions about the CSE, claiming that it is a subtle way of pushing LGBTQ agenda in Ghana.

Speaking to a delegation from the Coalition for Proper Human Sexual Right and Family Values, Mr. Mahama said he would rather focus on improving the quality and accessibility of education when voted into power.

“Talking about the controversial CSE, I can assure you that, we will spell out not only in the curriculum but in our manifesto what we think about it. Our manifesto will also come clearly about these issues that are trending. When the Second World War ended, there was a universal declaration on human rights by the UN. I am not aware that the world has met again and decided to review the rights. Unless it is tabled and the majority of the countries in the world accept that these are rights, then we can look at that.”

“The CSE education as we can see in all the guidelines and brochures is not appropriate and should not be a part of the curriculum. So if the government has made any move, they should not reject but withdraw and abolish it completely. There are other priorities than CSE at this time”, he added.

The government and United Nations Education, Scientific, and Cultural Organisation (UNESCO) launched the Comprehensive Sexuality Education programme in February 2019 but concerns have been raised about the potential for pupils to be given awareness of sexuality and LGBTQ issues at too early a stage.

Groups such as the Minority in Parliament, civil society organizations and religious bodies have called on the government to withdraw the CSE from the new syllabus.

However, President Nana Addo Dankwa Akufo-Addo has reiterated that he will not destroy the values and culture of Ghanaians through the introduction of the Comprehensive Sexuality Education into Ghana's Educational System stating that he understands the values of the Ghanaian society and would not attempt to destroy it for anything. Nana Addo's assurances on 'obnoxious' CSE a charade – NDC

Though President Nana Akufo-Addo has said that no educational programme will go against the country's values, the NDC has said the President's assurance is just charade.

The NDC feels that President Akufo-Addo only spoke on the issue after “an avalanche of condemnation which he could no longer ignore.”

Confident of winning power in 2020, the NDC says it “will be under no obligation whatsoever to respect the obnoxious CSE agreements the Akufo-Addo led government has entered into.”

Coronavirus: Africa will not be testing ground for vaccine, ...
23 minutes ago

AU predicts Africa's economies may be decimated by Covid-19 ...
38 minutes ago