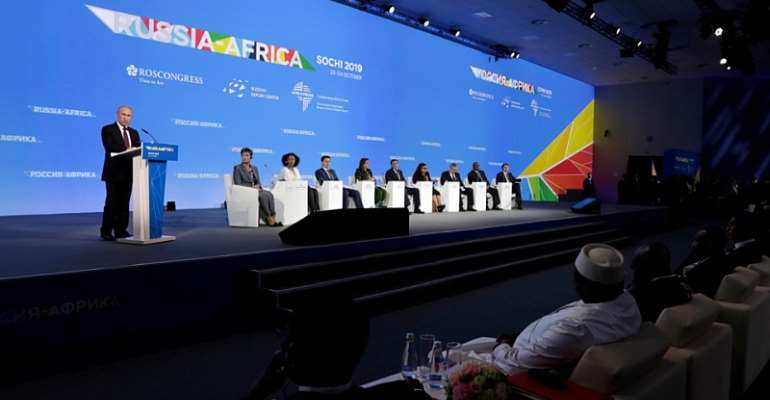 Military cooperation is set to dominate the first Russia-Africa summit in the Black Sea resort of Sochi, attended by leaders and top officials from all 54 African countries and scores of African businessmen eager to tap into Russia's emerging market.

While opening Wednesday's summit, Russian President Vladimir Putin told leaders and representatives of Africa's 54 countries that he would seek to double trade ties between the two partners over the next 5 years.

Moscow's relations with Africa, marked by strong support for independence movements and training a generation of African leaders, declined with the collapse of the Soviet Union in 1991.

But now Russia is back, after making arms exports the major selling point in 2018, estimated at 18 billion euros, according to the Stockholm International Peace Research Institute.

Military and security cooperation
Putin's high-profile moves to strengthen Russia's influence in Africa are nowhere more evident than in the Central African Republic, an extremely poor but strategic country that traditionally has closer ties to former colonial power France.

Moscow's training of troops, mediating peace talks with militias and providing security and advice to President Faustin-Archange Touadera are fuelling tensions with Paris.

Furthermore, Touadera, who is attending the Sochi summit, on Wednesday urged the Russian president to extend military aid to help Bangui overturn an international arms embargo.

The weapons ban dates back to 2013 when the country, ravaged by civil war, had no legitimate government.

“Armed groups get heavy weapons by circumventing the embargo – it works against the legitimate government," Touadera said in a face-to-face meeting with Putin.

The two-day event in Sochi will also see more than 3,000 delegates prepare deals and discuss topics ranging from the fight against terrorism to nuclear technology, and agriculture and mineral extraction.

"A lot of emerging markets will be looking at a potential military cooperation deal with Côte d'Ivoire, which is keen to renew its military capabilities," says Kobi Annan, a consultant with Songhai Advisory, an African investment and risk advisory think tank.

According to Annan, whose company covers 19 sub-Saharan African markets, Ivoirian leader Alassane Ouattara has brought a massive 70-person delegation to Sochi, including businessmen in search of partnerships in digital transformation and sustainable development.

Oil and gas
The Accra-based economist also expects more energy deals, like the accords signed last year by Russian firms to construct a liquefied natural gas terminal off the coast of the Ghanaian port city of Tema.

Russia's trade with Africa is less than half that of France, and 10 times less than China, which invests 54 billion euros in the continent every three years.

To reverse the trend, Vladimir Putin has promised cooperation without "political or other" interference, at a time when some in Africa are starting to express concern about states' dependence on China.

Trade without conditions
Such is the case of Zimbabwe, a country desperate to find a new market for its diamond industry, which has been largely shunned by Western countries because of allegations of human rights abuses by the ruling Zanu-PF party.

The Sochi meeting also takes place as the African Union has expressed interest in changing the rules of the participation of its members at such big summits.

The Pan-African body says it is timely for the AU Commission to lead and represent the continent, arguing that gatherings between all of Africa's leaders and stand-alone partners like China, the EU and Japan reflect poorly on Africa's dignity.