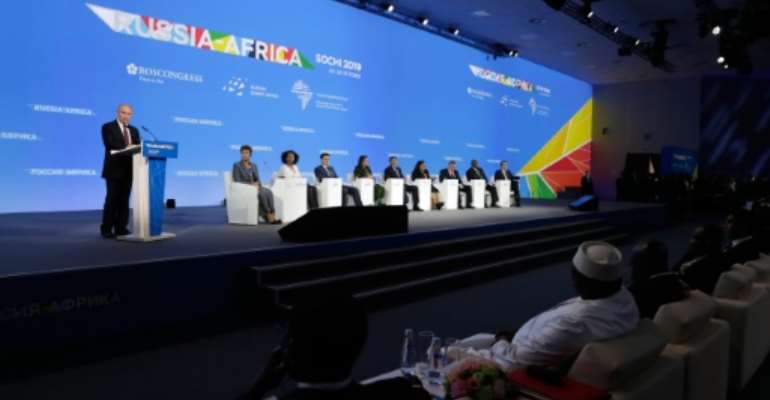 The Russia-Africa event at the Black Sea resort has brought together delegates to discuss everything from nuclear technology to mineral extraction. By Mikhail METZEL (SPUTNIK/AFP)

Russia is showing off its next generation Kalashnikov assault rifles, helicopters and facial recognition systems as President Vladimir Putin hosts dozens of African leaders for a major summit in Sochi.

The Wednesday and Thursday event at the Black Sea resort has brought together delegates to discuss everything from nuclear technology to mineral extraction -- but on the sidelines, stands for arms companies dominate.

Russia has been a major supplier of weapons and military equipment to African nations and the country's arms exporter hopes the first Russia-Africa summit will help further boost business on the continent.

"We would like to expand our presence there, of course," Rosoboronexport director Alexander Mikheev told AFP.

He said that African countries now accounted for 40 percent of the exporter's current orders.

All 54 African states were represented at the event and Rosoboronexport said it planned to conduct meetings with the top leadership of 15 countries on the sidelines of the gathering.

Russian and African attendees were offered an array of exhibits at which they could hold guns, pose for pictures or leaf through a catalogue of infantry weapons translated into French and Portuguese.

"We adapt to the needs of our clients"," said an official at one of the stands.

"South Africa uses older models, if you want to keep the same ammunition they will be compatible with these new arms," he told one delegate, letting him hold a Kalashnikov.

"It's so light," exclaimed the man who identified himself as a South African doctor with a "personal interest" in weapons.

Behind him, a Rosoboronexport representative sang the praises of facial recognition systems which she said were "the most precise in the world" and could help secure borders, protect infrastructure and fight illegal trafficking.

"Twenty (African) countries are currently working with Russia," said Rosoboronexport's Mikheev, estimating the value of current arms contracts with the continent at $12 billion.

This year alone, nine countries including Rwanda, Mozambique and Angola are set to receive Russian arms.

"Over 900 helicopters made by Russian Helicopters' enterprises are registered in African countries," the company said in a statement.

"This is almost one in four helicopters on the continent."

On the sidelines of the summit, Ethiopia agreed to buy a Pantsir missile system but Rosoboronexport said no major arms sales were expected to be announced at the end of the two-day gathering.

Moscow has in recent years struck a series of military agreements to provide military expertise and train soldiers in Africa.

"It's very important to showcase Russia's capabilities today," he said. "Not just in the military sphere."

Observers say Moscow has been skillfully using a combination of arms exports and security expertise to expand its political and economic footprint in Africa.

"Guns have opened many more doors for the Kremlin in Africa than butter," said Paul Stronski, a senior fellow at the Carnegie Endowment for International Peace.

ASEPA petitions Presidency for names of members on committee...
23 minutes ago