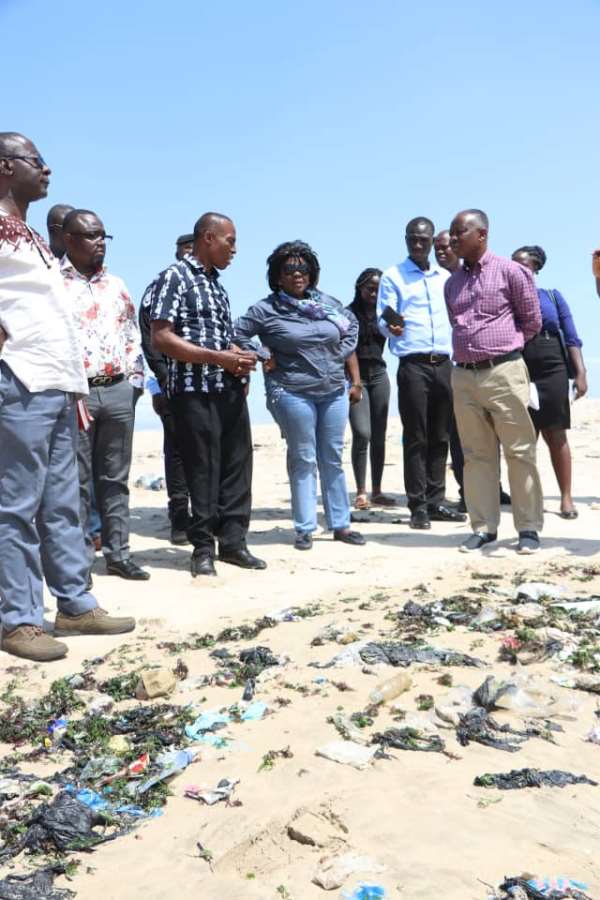 The Minister for Sanitation and Water Resources, Hon. Cecilia Abena Dapaah is set to take her inspection tour to the Ashanti Region very soon after wrapping up the Greater Accra Regional exercise.

The exercise which started in early September has seen the Minister and her executives inspecting the various Municipalities in the Region to keep the Municipal Chief Executives (MCE’s) on their toes to ensure members of their assembly keep a clean environment at all times.

This week, a similar expedition was undertaken to various municipal assemblies as the Minister and her sector climaxed the tour of the Greater Accra.

It all started on Wednesday, October 22, 2019, where Hon. Cecilia Dapaah and her team made the first stop at the Kpone-Katamanso Municipal Assemble. There they were led by the MCE for the area, Hon. Solomon Tetteh to visit the Kpone landfill site as well as take a stroll in the townships to inspect how people are keeping their surroundings neat.

The team inspected communities in those assemblies and visited key areas such as the Tema waste treatment plant, the GAMA sewerage project in Ashaiman, solid waste transfer station, and the institutional toilet project at the La Anglican basic school.

Following several hours of trekking under the sun, the Minister and her team called it a day knowing that they would continue on Wednesday.

Yesterday, they left off from where they ended on Tuesday and visited four more Municipalities including Weija, Gbawe, Ga Central, and Ga South.

Amongst many other things checked, Hon. Cecilia Dapaah and her team scanned communities in the above mentioned Municipalizes to ensure people are living in good sanitary conditions.

In addition, she was critical that every household had access to potable drinking water while insisting that there should be a toilet facility in every home as part of efforts to totally clamp down on open defecation.

Giving a brief observation midway through the tour, Hon. Cecilia Dapaah shared her satisfaction to how clean the various municipal assemblies have been kept and encourage the MCE’s to continue working on the grounds to ensure President Akufo-Addo’s dream of making Accra one of the cleanest cities in Africa becomes possible.

“I am very pleased because as you have seen the MCE’s are working. We have engaged them as well as the service providers on several occasions led by the Zoomlion.

“Every municipality has its own contractor they are working with so we came here to inspect and see for ourselves if the work they are doing in the communities is good or not.

“Since we got here, you can see there has been much improvement. Am very happy that within the next two to three months, things will still improve.

“We thank God that the vision of the president is going on well and I am happy as the Minister to see this”, Hon. Cecilia Dapaah told journalists after a community engagement in Tema West.

The Ministry has urged every citizen to adopt good sanitation practices in their respective homes, workplaces, as well as the community in which they find themselves to promote good health.