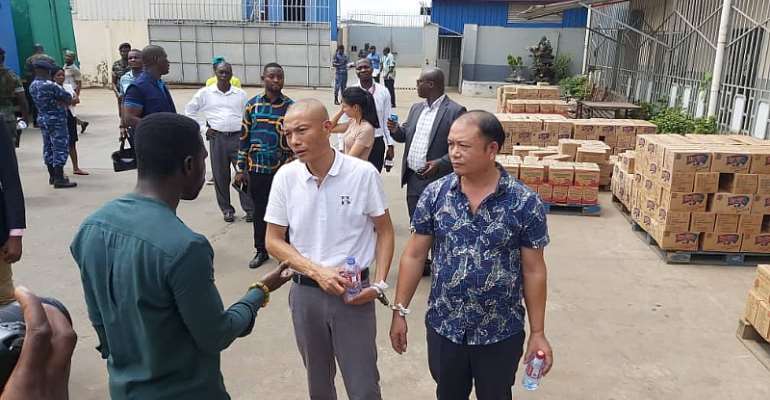 Two Chinese nationals have been grabbed for allegedly falsifying Value Added Tax (VAT) invoices and evading payment of taxes to the state.

The two, Guo Wang Zhong, Managing Director of Dada Foods, and You Qing Yan, Production Manager of the company, were arrested in an operation by the Special Revenue Mobilization Taskforce of the Ghana Revenue Authority (GRA) in Kpone in the Greater Accra Region.

Officials say the suspects were picked up following a tip-off by the Counter Intelligence Unit under the Office of the Senior Minister.

Henry Bradford Sam, head of Revenue Tax Mobilization at the GRA, who spoke to Citi News about the latest arrest said the suspects will be charged and sanctioned in accordance with the law.

“We are charging them for suppression of sales, tax evasion and making false and misleading statements. Ghana Revenue Authority will reassess the company, retrieve all the invoices they have issued to them and recheck the amount and subject them to comprehensive tax audit. When the tax audit is completed, any tax shortfall will attract a 100 percent tax penalty pursuant to section (74 & 81) of the Revenue administration ACT (2016).”

The Ghana Revenue Authority (GRA) has constantly served notice to the use of prosecutions as its major weapon to fight against non-compliance, tax evasion and tax customs fraud.

GRA has warned income-earning persons, potential and existing recalcitrant taxpayers to amend their ways and become compliant since its prosecution policy will deal with persons who violate the country's tax laws.

The Authority has a policy aimed at outlining the circumstances under which Tax and Customs offenders may be prosecuted and also standardising processes and procedures for prosecution by the GRA.