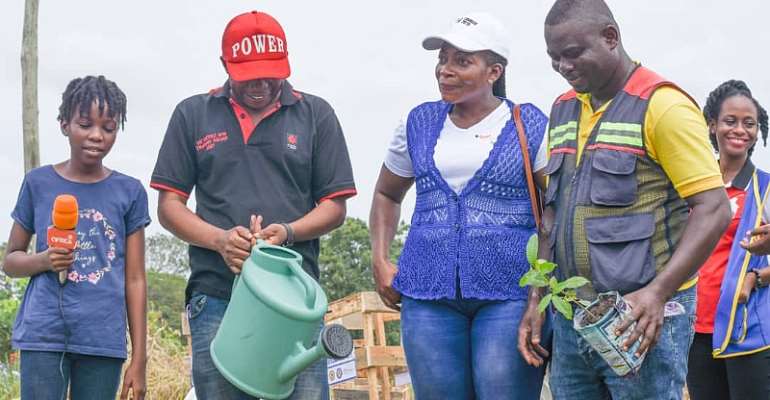 Tema supreme Leo Club, the youth wing of Lions Club international on Saturday 19th October, embarked on tree planting in Tema community 10 as one of the ways to mitigate climate change within the Tema metropolitan assembly and beyond.

The 100 mahogany tree species planted at the shoulders of Monte Carlo street in community 10 were to serve as windbreaks.

Mr. Wisdom Aditsey, head of environmental health at TMA who led the tree planting exercise as part of efforts to improve tree cover in Tema said, Tema is known as an industrial area which has a lot of carbon and hazardous elements released into the atmosphere, has an effect on climate change and humans.

He said the exercise form part of a series of activities the assembly is putting in place to reduce to the barest minimum the effects of climate change in the area.

Climate change, he said, was devastating and a threat to biodiversity and the ecology.

The TMA believes that the best possible way to ensure the sustenance of life on earth is to plant more trees," he told ModernGhana on the sidelines of the programme.

The Assembly, he noted, was determined to mitigate the harmful effects posed by the excessive emission of carbon into the atmosphere through the tree planting project.

‘‘This tree planting that we are doing is a small contribution, but a symbolic gesture to show everyone to reforest to protect the environment", he said.

He appealed to everyone should at least own and nurture a tree as their own to reduce global warming.

Leo Paul appealed to the law enforcement agencies including the Environmental Protection Agency (EPA) to strictly enforce the laws and punish people who would not abide by the laws and regulations governing the environment.