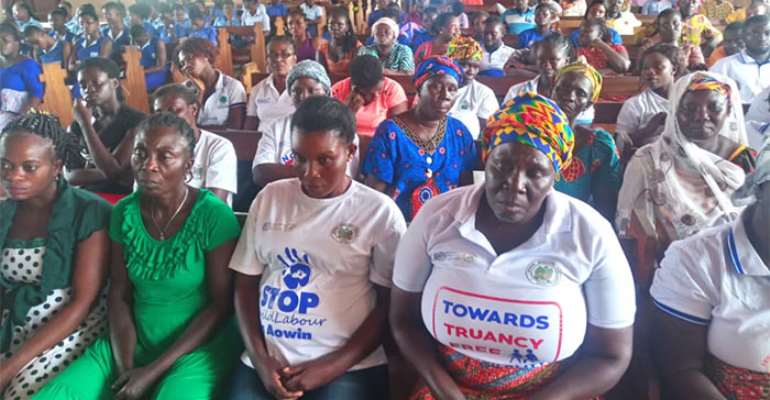 A Deputy Minister of Lands and Natural Resources, Naana Eyiah, has said government is working out alternative job avenues for the many young women who were engaged in illegal miming activities also called ‘galamsey’.

“My outfit is poised to create jobs for the youth, particularly, the females who were once doing illegal mining with their male counterparts,” she said.

“Some of the males who have been prevented from engaging in galamsey are currently into palm nut cultivation and other alternative income earning ventures,” according to her.

“So my ministry has decided to support the ladies who were also into galamsey. Those who want to learn a trade such as dress, soap and beads making or do some retail businesses, my outfit is ready to support them”, the deputy minister indicated.

Naana Eyiah, who is also the Member of Parliament for Gomoa Central, stated this when she met with some women groups at Enchi in the Aowin Municipality of Western North Region.

The minister was in the area to assure the females who were into galamsey that the government had committed resources to create alternative source of income for them.

She noted the rate at which rivers and the vegetative covers were being destroyed by the activities of illegal miners called for decisive action to bring the situation under control.

” So the government placed a ban on illegal mining and introduced Community Mining which would encouraged responsible mining”, she added.

She noted that the best way to end the menace was for government to create an alternative livelihood for tens of thousands of youth that went into the illegal business to make a living.

“My ministry’s initiative would see the young ladies acquiring employable skills and it will be one sure way of addressing the menace of galamsey”, she pointed out.

The Municipal Chief Executive for Aowin Samuel Adu-Gyamfi refuted rumours that he (the DCE) was engaged in galamsey.

He expressed the hope that the government’s Community Mining project would help save the environment from the activities of illegal miners.