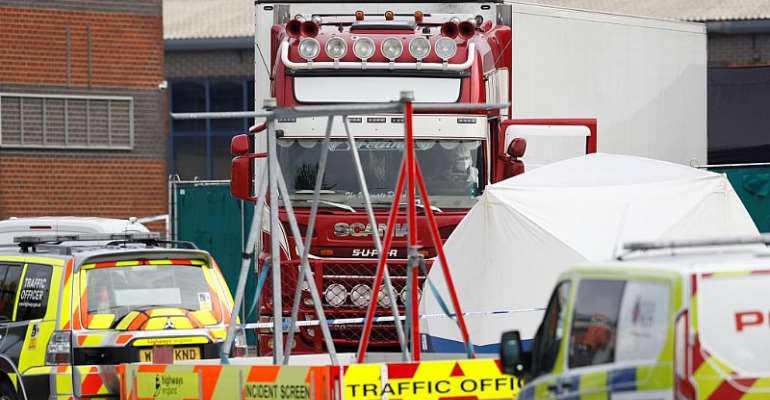 British police have found the bodies of 39 people inside a truck, believed to have come from Bulgaria, at an industrial estate east of London. The driver has been arrested on suspicion of murder.

services were alerted to people in the truck container, on an industrial site in Grays, about 30km from central London.

The truck was thought to have entered Britain on Saturday at Holyhead in North Wales, a major entry point for traffic from Ireland, having originally started its journey in Bulgaria.

The driver of the truck, a 25-year-old man from Northern Ireland, has been taken into custody.

Bulgaria's foreign ministry said it could not confirm at this stage whether the truck had started its journey from the country.

Nationalities not yet confirmed
All those in the container, 38 adults and one teenager, were pronounced dead at the scene after the emergency services were called to the Waterglade Industrial Park, not far from docks on the River Thames.

Police officers in forensic suits have been inspecting a large white container on a red truck next to warehouses at the site. Essex Police Deputy Chief Constable Pippa Mills said: "At this stage, we have not identified where the victims are from or their identities and we anticipate this could be a lengthy process. This is an absolute tragedy."

For years, illegal immigrants have attempted to reach Britain stowed away in the back of trucks, often seeking to reach the United Kingdom from the European mainland.

In Britain's biggest illegal immigrant tragedy in 2000, British customs officials found the bodies of 58 Chinese people crammed into a tomato truck at the southern port of Dover.

We will not hesitate to proceed on strike on Monday if deman...
32 minutes ago

Treason trial: Bomb the ministry for transmission to go off ...
48 minutes ago