One For Kwadwo Oppong Nkrumah 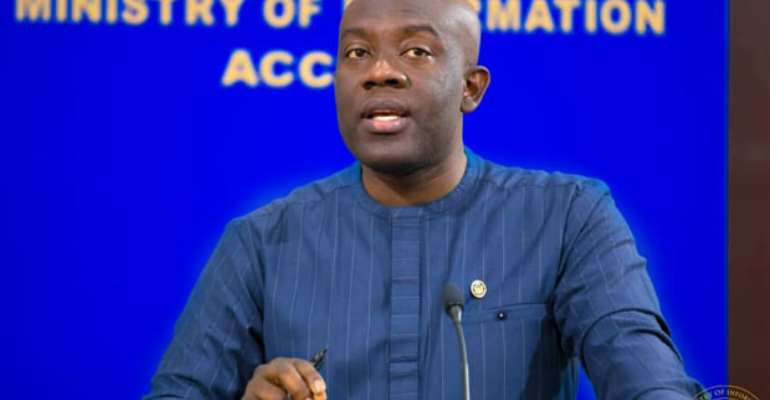 In this modern era of democratic dispensation, the Ministry of Information is undoubtedly the most important ministry in the scheme of things. Gone were the days when mobile vans were used to spread propaganda in villages. In those days, we had only one radio station which was Radio Ghana and as such there was no any counter information, if even the people were misinformed. We were made to understand that Nkrumah never dies and that Nkrumah was our messiah.

As the years rolled by, we came face to face with the 'Culture of Silence' during the Rawlings era, where no Jupiter dared challenge any decision taken by the government. To make matters worse, the Criminal Libel Law was introduced and men became women in the media landscape. People like Malik Kweku Baako and Haruna Atta landed in jail when they fell foul to the law. During the 1996 electioneering campaign, candidate Kufuor promised Ghanaians that when he held the reins of power he would scrap that law, because it was an impediment to freedom of speech. The Lord of Host gave Kufuor the nod to rule Ghana and he in turn appointed Nana Akufo Addo as the Attorney General and Minister of Justice. The first thing Nana Addo did was deletion of the law from our status books, thereby opening the floodgate for the establishment of many private radio and television stations.

One minister who has worked so hard to gain my respect is Kwadwo Oppong Nkrumah, the Minister of Information. The guy knows the importance of the ministry and he continues to gain the respect of almost all the journalists in Ghana. He is polite, unassuming, respectful and very hardworking. He has brought a game change in the art of informing the people of government policies and he also continues to set records straight anytime the opposition National Democratic Congress (NDC) tries their mischievous antics all in an attempt to poison the minds of Ghanaians. His style is unique. He knows how to dilute a poison. He refuses to allow the media to take the fight to him but rather takes the fight to the media. No matter how hard some journalists, during his encounter with the media, tried to provoke him, he refused to play ball. The handlers of the president, who recommended his appointment as the Minister of Information, did a good job and the president must be grateful to them.

My first encounter with the fine gentleman was at the Sunyani Residency, when the president toured the Bono Region. He too had never met me before but when I engaged him in a conversation, I saw in him a man who knows his job. When I introduced myself as the columnist who writes the Angel Gabriel column, he became amused. He thought of meeting a flamboyant gentleman who is not approachable. As we were about to part ways, he appealed to me to continue with the good works and also try to expose the weakness of government so that they too will take the right path for the sake of mother Ghana. And he is a handsome guy!!

Since losing power disgracefully, the NDC communicators, led by their disrespectful National Communication Director, in the person of Sammy Gyamfi, had been so desperate and in their desperation, lie through their teeth, thinking Ghanaians are so docile. As they kick, yell and shout on television and radio stations, Mr. Oppong Nkrumah takes his time to tell Ghanaians nothing but the gospel truth. When these NDC communicators are exposed they tow another line and begin spewing out nothing but the untruth. They have tried so hard to tag the Akufo-Addo led administration as corrupt; but sadly Ghanaians can read between the lines. These days you don't hear them touting their own success stories as far as good roads are concerned because wherever the president visited, the chiefs and people complained of their road and dilapidated school blocks, as well as the unwholesome water they drink. The chief of Sankore, in the Bono Region, sarcastically exposed the lies of John Mahama when President Akufo-Addo visited the town. Instead of openly complaining about the bad nature of the road, he rather thanked the president for not coming to the town in a helicopter but by road. In response, the president told the wise chief that he knew what he wanted to tell him and that the Sankore roads will see a facelift.

And Ignatius Baffuor Awuah too, the Minister of Labour, has been a friend for so long a time. He is one politician who has passed through the mill. He was once a District Chief Executive of Sunyani, a Deputy Regional Minister, a Regional Minister, a three times Member of Parliament and now a Cabinet Minister. As to where he will end up, only God knows because the sky is his limit. When he had the intention to run as a parliamentary candidate of Sunyani West, I tried to persuade him to concentrate on his job as a Regional Minister but he was able to convince me to support him because he wants an experience in Parliament.

Since he became the Minister of Labour, the annual agitation of the labour front has drastically reduced. His magic wand is his amiable smiles and captivating human relation. His negotiation skills are unsurpassed and his ability to cool down tempers when things go bad is very appreciable. The last time I visited him in his office, he was eating banku and okro soup during lunch time. I was expecting him to ask his official driver to drive him to one of the restaurants in Accra and have a nice time as I do anytime I visited Accra.

Few people know that anytime this minister wants to visit his constituency, he packs his official V8 luxurious car and take the public bus. You will see him in either the O.A bus from Accra to Sunyani or the VIP bus from Accra to Sunyani. And he returns in the same buses. His human relation is so nice that he would not allow you to leave his office when you decide to leave. The problem I have with Mr. Baffuor Awuah is that since he became a minister and sojourned in Accra, our friendship has not been the same again. I am in my holy village while he lives in Accra and fights the congested traffic every day. If he had listened to my admonition, he would have been breathing the fresh air that I breathe here in my holy village. Anyway he is serving his country like I also do on my farm, but the difference is that, I am more comfortable in my farm because I have set not less than 100 traps and a week never passes without one of my traps catching a grass cutter or a rat. Who say man no dey?