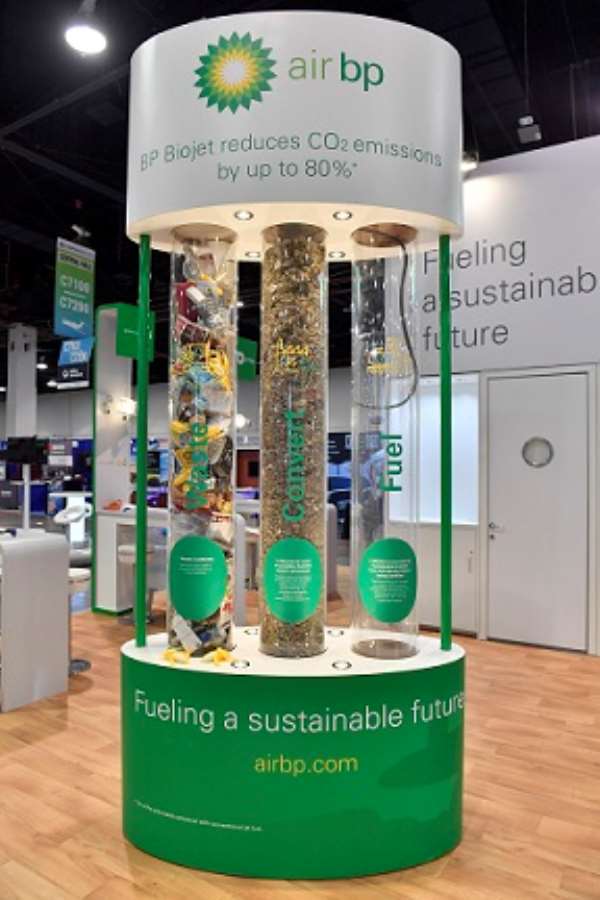 This year, Air BP will be highlighting how solid waste from homes and businesses, such as packaging, paper, textiles, and food scraps (including bananas) that would otherwise go to landfill or incineration, can be converted into sustainable aviation fuel (SAF).

Following the success of its SAF fly-in during EBACE Geneva in May 2019, Air BP is also making SAF available to general and business aviation customers as well as aircraft manufacturers at Stockholm Arlanda (ARN/ESSA) Airport.

Derived from non-palm renewable and sustainable raw materials, the fuel is made by leading fuels producer, Neste, and supplied by Air BP. It can reduce greenhouse gas emissions by up to 80 percent over its life-cycle compared with conventional jet fuel. Air BP signed a collaboration agreement with Neste in October 2018 to explore opportunities to increase the supply and availability of SAF for airline customers.

In 2016 Air BP created a strategic partnership with Fulcrum BioEnergy with an initial investment of $30 million. The Californian company is building its first plant in Reno, Nevada, which will produce sustainable transport fuel made from household waste. Fulcrum intends to construct additional facilities and ultimately, plans to supply Air BP with over 50 million US gallons of SAF per year.

Irene Lores, global sales and marketing director, general aviation, Air BP said: “We are delighted once again to be putting SAF at the heart of our NBAA exhibit and to be able to offer SAF at Stockholm Arlanda airport, Sweden, to support the SAF fly-in at the event. The availability of SAF at Arlanda gives operators further opportunity to lift sustainable aviation fuel and helps us to understand any obstacles in its adoption. At Air BP, we believe it is important to keep working with multiple suppliers, customers and partners, to support the commercialisation of SAF which is something we will be focusing on at NBAA-BACE this week.”

Air BP has supplied its BP Biojet branded SAF to commercial airlines customers at more than 15 airport locations, including at Oslo airport in Norway, where it was the first to supply SAF through the existing airport fuelling infrastructure. In 2018 Bombardier’s demonstration fleet was refuelled with BP Biojet in Stockholm Arlanda en-route to EBACE and Air BP has also supplied airlines on an ad-hoc basis at airports including Stockholm Bromma (BMA/ESSB), Karlstad (KSD/ESOK) and Göteborg Landvetter (GOT/ESGG).

Air BP will be exhibiting with Europe’s largest solar developer, Lightsource BP; aviation services company, Rocket Route, and leading air charter company, Victor. The latter two organisations are part of the Alyssum Group of which BP Ventures is a shareholder.

FixingTheCountry Movement to march in support of Akufo-Addo'...
6 minutes ago