Mali president on the ropes as jihadist revolt mounts

By Amaury Hauchard and Serge Daniel 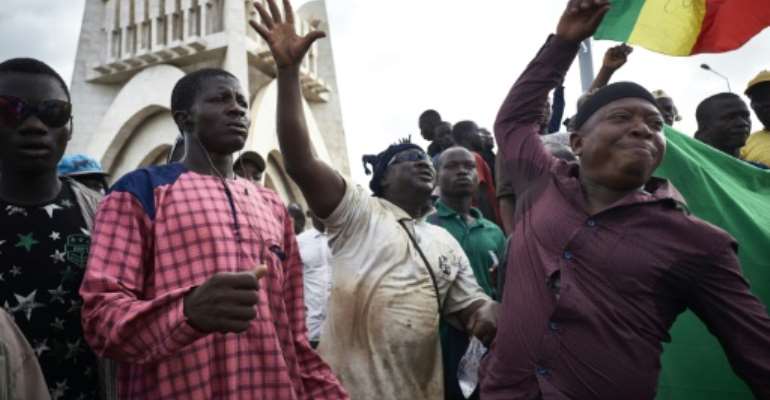 Anger is flaring in Mali over worsening security -- much of the country is out of the government's control. By MICHELE CATTANI (AFP)

Malian President Ibrahim Boubacar Keita has few strong cards left to play as he seeks to roll back a jihadist insurgency and mounting public discontent.

Thousands of civilians and soldiers have died since armed Islamists began their revolt in northern Mali in 2012 -- a campaign that has spread to the country's volatile centre and to neighbouring Burkina Faso.

The failure of Mali's poorly-equipped and demoralised military is now sparking an outcry, shaking confidence in Keita's government.

Relatives of dozens of troops killed in twin attacks in central Mali took to the streets on October 2 to accuse the government of failure and indifference -- a scenario that stoked memories of the runup to a military coup in 2012.

"When army wives ask their husbands not to go to the front anymore because they are underequipped, when people talk about corruption in the military, isn't it time to be asking questions?" an African diplomat in Bamako asked.

Keita called for three days of national mourning after the bloodbath, appealed for unity and downplayed any speculation that he could be toppled.

"No military coup will prevail in Mali, let it be said," said Keita, who was elected in August 2013 and re-elected last year. "(...) I don't think this is on the agenda at all."

But beneath this confident appearance, Keita's government is failing, say critics.

"The Malian public is fed up," said Nouhoum Sarr, head of the African Front for Development (FAD), an opposition party.

A Western diplomat said that the government "seems short of solutions in the face of the attacks", noting that swathes of the country were now out of its control.

Security deployments in the Sahel region, where the so-called G5 countries are facing a jihadist insurgency. By (AFP)

Ibrahim Maiga, a researcher at the Institute for Security Studies (ISS) in Bamako, said "fatigue and impatience" were the prevailing emotions about Mali's problems, both at home and abroad. France and the United Nations have committed thousands of troops to shoring up the country.

"More and more resources are being allocated to Mali, but there is more and more violence at the same time," said Maiga.

Keita has sought to showcase the successes of his embattled government, such as leading an ongoing disarmament process and integrating former rebels within the army.

But he has admitted that limited resources mean that October's attacks "could happen again".

The Malian army has few means to pursue the jihadists, who have been using classic guerrilla tactics in in vast, arid country. By Agnes COUDURIER (AFP)

Keita is notably failing to lure opposition figures into his strategy.

Several have declined his offer of a dialogue aimed finding a way out of the crisis. And the president has angered several armed groups by opening the door to revising painfully-won peace accords reached in 2015.

Sarr said many people were sceptical about what happened in the attacks on September 30 and October 1.

The official death toll of 40 is widely rumoured to be an under-estimate.

"Telling the truth is a must and the government has not been able to say what really happened," he said, referring to October's attacks.

Adding to the security crisis are familiar problems in Mali, an arid country that is one of the poorest in the world. Desertification and flooding during the rainy season have added to woes.

Moustapha Diallo, a sociology professor at the University of Bamako, said Keita was a weakened figure.

"In many people's eyes, the president no longer has the grip that he had when he arrived in power", he said.

Police hunt for five members of kidnap syndicate in Savannah...
31 minutes ago