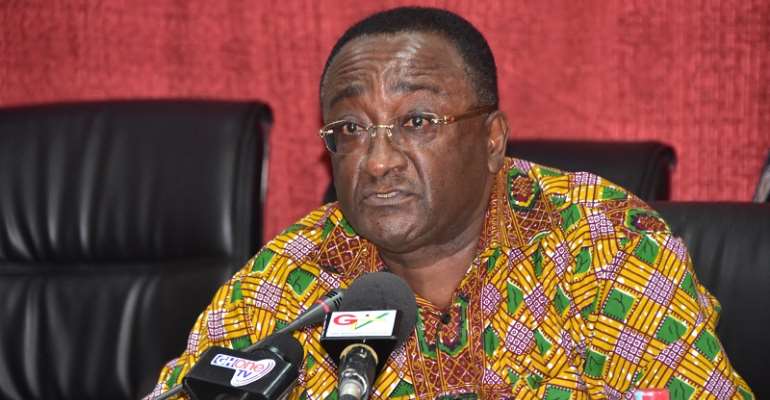 The communication outfit of the NDC in the Nandom constituency refers to a statement made by the Minister for Food and Agriculture, Hon Dr. Owusu Afriyie Akoto, as misleading.

The minister said, "These gentlemen, who represent the youth groups, traveled all the way from Nandom in the Upper West Region to express their gratitude to the Minister for Food and Agriculture, Hon. Dr. Owusu Afriyie Akoto, for the implementation of the flagship Planting for Food and Jobs programme of which they are beneficiaries".

The gentlemen in the picture who are clearly identified as the constituency NPP youth organiser and his guys paraded themselves as leadership of youth groups in Nandom which according to the communication outfit of the NDC, is blatant lie.

The NDC communication outfit of the Nandom constituency therefore called on the minister to reframe his statement to erase the erroneous impression created on Nandom Youth Groups.

The NDC Communication bureau of the Nandom constituency has intercepted a publication on the Facebook wall of the Agric Minister and peacefmonline.com on 20th and 21st October, 2019 respectively which is very misleading to the general public. The minister wrote, "These gentlemen, who represent the youth groups, traveled all the way from Nandom in the Upper West Region to express their gratitude to the minister for Food and Agriculture, Hon. Dr. Owusu Afriyie Akoto, for the implementation of the flagship Planting for Food and Jobs programme of which they are beneficiaries".

The publication points to pictures of some young men who paraded themselves as leaders of youth groups in Nandom representing their individual's groups at the Minister's office to express their gratitude to the minister on behalf of their groups as they benefitted significantly from the minister's Planting For food and Jobs project in the district.

We want to state vehemently and without mincing words, that the pictures of the young men who parade themselves as leaders of Nandom youth groups in generality is a blatant lie and misleading.

The young men in the picture are the Nandom NPP Constituency Youth Organiser, Patrick Nakpenaa, his driver, Aa-Inir Emmanuel (Agbonka), his sale's boy, Mohammed Mujaidu and his errand boy. The other man in smock is the minister in charge of Agriculture at the presidency, Dr Gyielle Nura, from Nandom-Guo and Hon. Akoto Owusu Afriyie and his officer.

We are very astonished these guys have deliberately deceived the minister of Agriculture the way they did. If indeed these NPP guys are the beneficiaries of the government's Planting For Food and Jobs project, then we are in serious crisis as a country. We thought the project was to benefit all Ghanaians. In all sincerity, most of the youth groups in the district are not part of the beneficiaries of this project as the young men in the picture seek to create.

It must be stated clearly that the young men in the picture are not leaders of any youth groups in Nandom apart from their political party, the NPP. So it is indeed conspicuous that the NPP constituency youth organiser and some of his guys represented their party youth groups and not the youth groups in generality in Nandom. We indeed admit that it is good to show gratitude to any person who helps you in anyway but that should be done genuinely.

We must make it clear that the Planning For Food and Jobs fertilizer smuggling spree that hit the country left Nandom in no exception. Majority of the farmers in the Nandom district struggled to get fertilizer to farm both last year and this year. We can recall some concern citizens in the district alleged the wanton smuggling of the fertilizers into Burkina Faso but as we speak, no investigations has been carried out to that effect to ascertain whether or not it was true.

We are therefore tempted to believing that the posturing of these young men is a deliberate attempt to cover-up the fertilizer smuggling spree that hit the district.

We therefore call on the Agric minister to reframe his statement having been told the truth now. We are also calling on the general public to treat the publication by the Agric minister as misleading and a deliberate attempt by the NPP young men in the picture to score cheap political points with their lies.