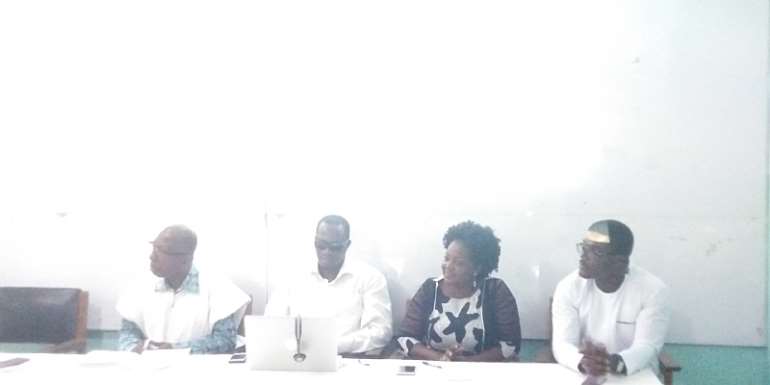 A group calling its self, the Election Community of Practice and Learning (ECOPL) says Government should officially declare the status of implementation of recommendations of the Constitution Review Commission (CRC) and the current members of CRIC.

According to the group, President Akufo-Addo must ensure that the Constitution is amended holistically, inclusively and transparently in accordance with the aspirations of Ghana.

Addressing the media in Accra, Convener of the group, Eyram Bashan said “We also call on the media to help us in reviving the conversation around the implementation of the constitutional review recommendations by informing the public through news and programming.”

She also added that ECOPL demands from government, notice on the status of implementation of recommendations of the CRC of which over 90% were accepted by government in a White Paper issued in June, 2012.

She mentioned that following the flaws in the constitution; in design and practice, have concentrated too much power in the executive arm of government undermining systems of checks and balances.

Madam Eyram Bashan stressed, “The commission was tasked to consult with the people of Ghana on the operation of the 1992 Constitution and on any changes that need to be made to the Constitution.

She emphasized that it was also tasked to present a draft bill for the amendment of the Constitution in the event that any changes are warranted.

The Convener further highlighted ‘Voice and the building of citizenship,’ ‘Subsidiary Constitutional Powers of Parliament’ among others are part of the six key areas which has been developed to guide the commission in its work.

Madam Bashan further disclosed that after the 2016 general elections and subsequent change in government, nothing substantial has been heard or done to implement the recommendations from the constitutional review exercise.

The ECOPL believes that a constitutional day without the full implementation of the recommendations from the CRC makes no sense if we cannot realize the approval to strengthen our constitution.

Communication and Learning Manager at Star Ghana, Mabel Viviey said reviewing the constitution is a key transformational development for the Ghanaian citizenry.

She said “To sustain the gains, we need a strong citizen activism to embark it. The key challenge is how do we mobilize the citizenry and engage well informed-citizens to pull support for this process?”

Madam Viviey added that since the interest of citizens must be looked at, they must also be well informed in order to gather momentum for the process.

She called on the media to join the campaign in challenging government to officially declare the status of implementation of recommendations of the Constitution Review Commission (CRC) and the current members of CRIC.

Ghana has been operating the 1992 Constitution since January 1993 following a national referendum. It embodies many features that seek to foster accountable, open, transparent and participatory democratic governance including provisions designed to ensure the independence of the judiciary and an impressive bill of rights and names the High Court as the Human Rights Court.