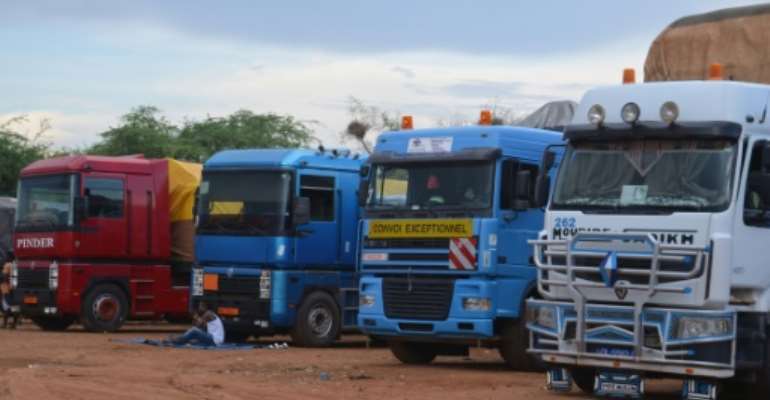 A long line of lorries from Niger and elsewhere in West Africa is stranded at Dan Issa after Nigeria closed its borders. By BOUREIMA HAMA (AFP)

"Nothing crosses into Nigeria and nothing comes out. It's hermetically sealed," said Amadou Idi, sitting in a makeshift shelter to keep out of the rain, and reflecting on the downturn in his luck.

"We twiddle our thumbs and pray."

Idi's job is a transiting agent -- to get goods across the border to Nigeria at the Dan Issa frontier post in southeastern Niger.

But he has been out of work since Nigeria dramatically closed its borders with its neighbours on August 20, declaring it wanted to put an end to chronic smuggling.

Niger, which shares a 1,500-kilometre (900-mile) border with Nigeria, has been badly hit by the closure, along with Benin. Both nations are among the poorest in the world.

Cowpeas, a local staple, are weighed at Maradi's cereal market. Prices have fallen since Nigeria closed the border since August 20 to stop smuggling. By BOUREIMA HAMA (AFP)

A long line of lorries from Niger and elsewhere in West Africa is stranded at Dan Issa. Some are full, some laden with goods. The drivers and their assistants sleep on the ground or in the cabins of their vehicles.

All along the 30 kilometre road between the border and the city of Maradi, customs officials and police officers sip tea or coffee and chat.

Groups of young people at a loose end and motorbike taxi drivers short of customers play cards under the shade of the trees.

Three and a half million people live in and around Maradi. Concern and indignation are growing among the people there, most of whom survive on agriculture and trade.

That makes them highly dependent on their southern neighbour Nigeria, the biggest economy in west Africa with its oil riches and 190 million people.

"Maradi is suffocating," said Ali, a kabou-kabou driver, the local motorbike taxi. "The city is usually bustling with people -- now it's almost dead."

Concern and indignation are growing among the people in Maradi, most of whom live from agriculture and trade. By BOUREIMA HAMA (AFP)

"We are very angry," said Ahmadou Amadou, who imports motorbikes for a living. "The business sector is wasting away." If the border closure continues, then they will be ruined, he added.

Some locals remember the last time this happened, back in the 1980s -- and it lasted two years. And it was the same president, Muhammadu Buhari, who was responsible.

Buhari closed the borders shortly after he came to power. From April 1984 to February 1986 he kept them closed in response to the falling price of oil, a drop in exports and the smuggling of contraband.

In fact the border was only reopened after Buhari was toppled in a coup.

Amadou Oumarou, another Maradi resident, said his government should sit down at the table with Nigeria and negotiate a solution.

Falling prices are hitting locally made products due to a lack of buyers in Nigeria, while the price of products imported from Nigeria is soaring, he said.

Some traders are selling their rice cut-price just to get rid of their stock, said Chaibou Tchombiano, general secretary of Niger's union representing traders, importers and exporters.

The impact of the closure is having a ripple effect reaching as far as the capital Niamey, 650 km away.

"A tonne of imported cement (produced by the Nigerian corporation Dangote), which used to sell for 95,000 CFA francs has gone up to 120,000 francs, and cigarettes have risen from 25 to 100 francs each," said Mamanane Nouri, head of a consumers' group.

Ironically, one effect of the border closure seems to have been a rise in smuggling, which is taking place under the nose of customs officials.

Time for a top-up: A taxi driver in Maradi buys petrol smuggled across the border from Nigeria, where the fuel is heavily subsidised. By BOUREIMA HAMA (AFP)

A steady stream of motorcycles and vans took rice, beans and other products over to Nigeria, cutting trails across fields, an AFP reporter saw.

They came back laden with petrol, sugar cane and sweet potatoes, as well as parts for cars and motorbikes.

As one local, carrying two goats on the back of his bike, put it: "If we just sat there, waiting for the border to open, we'd die of hunger."

"Here, young people start trading from the age of 12," said local radio journalist Mansour Sani. "If the border stays closed for a long time, it will be a time bomb."