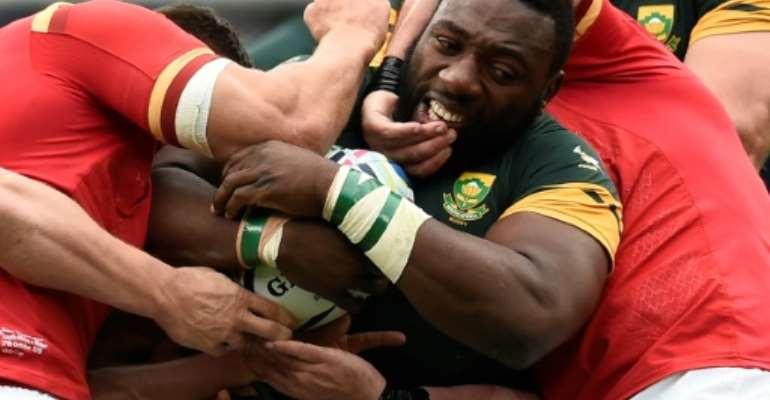 South Africa and Wales played each other at the World Cup four years ago, with the Boks edging the Welsh 23-19 in the quarter-finals at Twickenham. By LIONEL BONAVENTURE (AFP/File)

The Springboks have won 28 of the 35 games the two sides have played since the inaugural match in 1906, Wales winning just six, with one draw.

The two teams played each other at the World Cup four years ago, with the Boks edging the Welsh 23-19 in the quarter-finals at Twickenham.

They also ran up against each other in pool play in 2011, South Africa winning 17-16, but Wales survived to make the semi-finals.

In 2015, however, it was Fourie du Preez who broke Welsh hearts with a 75th-minute try after Wales had led going into the final 10 minutes.

Fly-half Handre Pollard, likely to be starting on Sunday, kicked five penalties and a drop-goal for the Boks, while Dan Biggar, also the current No 10 for Wales, scored 14 points and produced a try assist for Gareth Davies.

South Africa's 26-match tour of Britain and Ireland in 1970 was disrupted by anti-apartheid protests.

A police cordon was deployed for the match at Cardiff Arms Park after disturbances in the game against Swansea at St Helens.

But the only problem in the Welsh capital proved to be the weather, which transformed the pitch into a mud bath.

Young Wales skipper Gareth Edwards slid in for a try in the corner, but his conversion went wide. The two sides had to settle for a 6-6 draw and would not play each other again until 1994.

In 1994, South Africa embarked on their first European tour since the end of apartheid, playing 13 matches and two Tests.

The Boks, representing the rainbow nation, lost to Scotland A and a Barbarians side, but managed victories over Scotland (34-10) and Wales (20-12) a week later.

South Africa, under president Nelson Mandela, would host, and win, the World Cup a year later.

The home side's first game at the newly-opened Millennium Stadium in Cardiff in 1999 proved one to remember as then-coach Graham Henry guided his team to a first-ever victory over South Africa by 29-19.

Rob Howley, who was assistant Wales coach in Japan until he was sent home in disgrace amid betting allegations, was then skipper of the Welsh side, for whom Neil Jenkins kicked 19 points.

Mark Taylor became the first try scorer at the new stadium, the capacity of which on the day was just 27,500.

In 2014, Wales finally snapped South Africa's winning run of 16 matches since that Welsh win in the Millennium Stadium's inaugural contest.

Leigh Halfpenny kicked all the points for the home side in Cardiff with the Springboks managing just two Pat Lambie penalties.

The 12-6 win was Wales' second only victory over the Boks after a run of 22 successive defeats against New Zealand, South Africa and Australia.