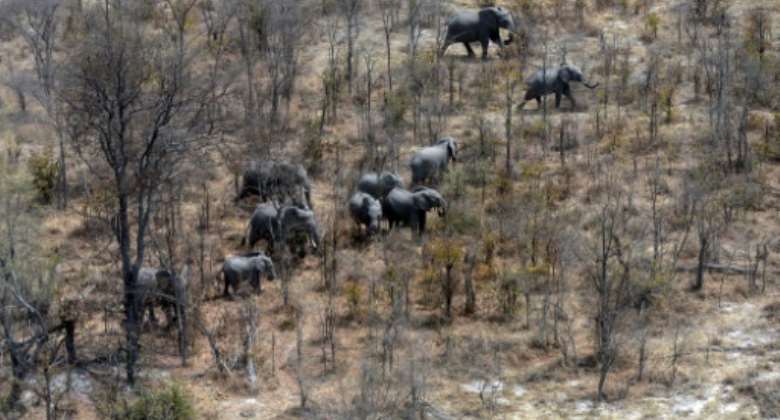 This aerial photograph shows elephants roaming in the plains of the Chobe district in the northern part of Botswana where officials say more than 100 elephants have died due to drought over the past two months. By MONIRUL BHUIYAN (AFP)

More than 100 elephants have died in two months in Botswana's Chobe National Park due to drought, which has also affected wildlife in other countries in the region, the government said Tuesday.

Several southern African countries are enduring one of the worst droughts in decades, caused by months of over-average temperatures and erratic rainfall.

The drought has wilted grasslands and dried up water holes, making it increasingly difficult for animals to survive.

Botswana's environment ministry said it has recorded a spike in the number of elephant and other animal deaths since May.

"More than one hundred elephants are estimated to have died naturally in the past two months," the ministry said in a statement, adding that 13 deaths were recorded just this week.

In neighbouring Zimbabwe, Its wildlife agency has recorded at least 55 elephant deaths over the past month due to lack of food and water.

Preliminary investigations in Botswana have also suggested some of the elephants may have died from anthrax.

"Due to the severe drought, elephants end up ingesting soil while grazing and get exposed to the anthrax bacteria spore," the ministry said in a statement.

"The animals are also travelling long distances in search of food which leaves some highly emaciated, ending in death."

Anthrax is an infectious disease found naturally in soil. It is generally contracted by herbivores and is a common cause of death for both wild and domestic animals around the world.

The environment ministry said it would be burning "anthrax related carcasses" to prevent the disease from spreading to other animals.

It warned the public not to touch any animal carcasses they might find and report them to the authorities.