Nii Okaidja Was Not Gbese Mantse 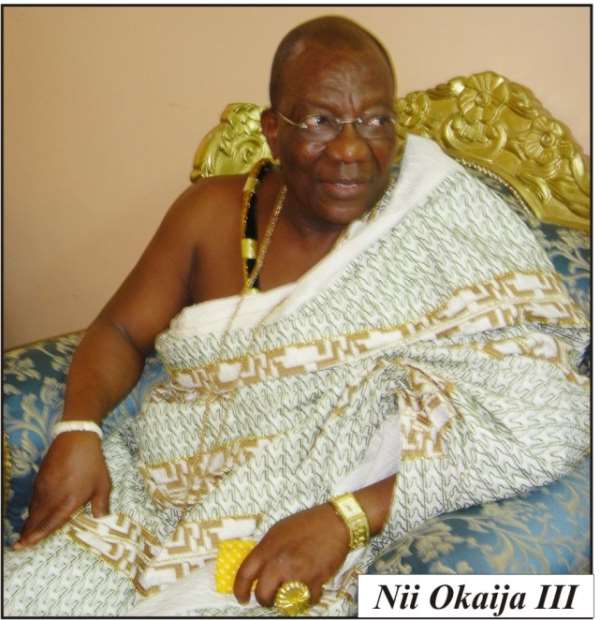 The Gbese Stool, has responded to a publication in a section of the media insinuating that the late Bill Okaidja Annan, was a chief of Gbese.

Below is a rejoinder to the said publication:

We make reference to the publication which appeared in the “TODAY” Newspaper on Monday, 14th October, 2019:

1. We wish to bring out to light and from your own Press Release, you stated categorically the Bill Okaidja Annan was not a gazetted Chief.

It means therefore that as he was NOT gazetted, then he (Bill Okaidja Annan) was NOT a Chief under any circumstances and had no capacity or Locus Standing to even acted or paraded as a Chief of any standing.

If he had died peacefully, he should be buried quietly with all the traditional and customary honours that he deserves as a Principal Elder of Nii Tetteh Ankamah We, and that all Gbese people should unite and constitute one formidable entity to participate in the funeral and give Bill Okaidja Annan the necessary befitting burial that is due him.

3. If you are not a gazetted Chief of Gbese, you cannot be the Adonten for the whole Ga State and that the substantive gazetted Mantse of the Gbese State is His Royal Majesty Dr. Nii Ayi-Bonte II, who is also at the same time President of the Gbese Divisional Council with gazette NO. 550 and who succeeded NII OKAI PESEMAKU III, who died on 1st December, 1978 with gazette NO. 549.

4. It should be noted further that His Royal Majesty Dr. Nii Ayi-Bonte II, duly customarily and legally succeeded Nii Okai Pesemaku III without any iota of doubt with his gazette NO. 550.

6. That Bill Okaidja Annan did not succeed Nii Agbofu as is being portrayed and that he was a self-styled chief and that his purported selection, installation and outdooring was declared null and void by the Greater Accra Regional House of Chiefs, Dodowa, on 19th June, 1985.

8. We wish to reiterate that if the Nii Tetteh Ankamah We Family is claiming that Bill Okaidja Annan is a Chief, the Onus of Proof is for them to submit the relevant documents which made him the substantive and undisputed Gbese Mantse.

9. We re-state that the “TODAY” Newspaper publication on Monday, 14th October, 2019, was full of lies, fabrication, concocted, putting dust into the eyes of the general public and that if Bill Okaidja Annan parades or paraded as a Chief, they should know that he has no capacity or Locus Standing to style himself as such.

10. It has to be re-echoed that the publication which appeared in the “Today” Newspaper is an affront to the judicial system and rule of law in this country and that this action amounts to contempt of Court and an abuse of Court process.

11. It has to be noted and pointed out that His Royal Majesty Dr. Nii Ayi-Bonte II, Gbese Mantse is the substantive and undisputed Gbese Mantse and that these are supported and buttressed by the following series of Judgments and other relevant legal documents for your scrutiny:

a. Extract from the National House of Chiefs.
b. Chieftaincy Bulletin on change affecting Status of Chiefs and other chieftaincy matters.

12. It is worth knowing that His Royal Majesty Dr. Nii Ayi-Bonte II, is a member of the Ga Traditional Council, and the Greater Accra Regional House of Chiefs, Dodowa.

13. Bill Okaidja Annan is a true indigene of Gbese and a soil of the Land, and if he has died we should all bury our differences and provide him with a befitting burial and that all of us should avoid creating unnecessary tension which would mar or dent the image of the Gbese State.

Currently, there is adequate peace and stability in Gbese, and therefore on 9th November, 2019, we shall rally all men and women to attend the funeral in an unprecedented manner and in their numbers.

Low remuneration of bankers could cause some bankers to leak...
25 minutes ago

We'll not allow this old man Akufo-Addo and his old men gov'...
52 minutes ago