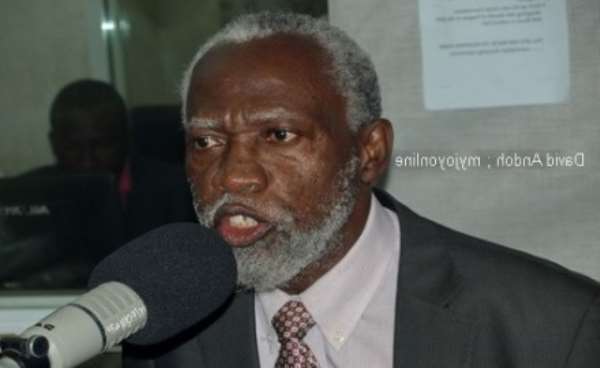 Hordes of foot- soldiers backed by a senior member of the ruling New Patriotic Party (NPP), have called on the leadership of the party to beware of the exploits of Professor Emeritus Stephen Adei, lest it sends the party to opposition once again.

The agitated senior party member, and the foot -soldiers, were reacting to a news item that Prof. Adei, the newly appointed Chairman of the board of directors of the Ghana Revenue Authority (GRA),

had sacked two board members from the Board, namely, Hon. Kwaku Kwarteng and Carlos Ahenkorah, Deputy Ministers of Finance and Trade respectively.

Powers of a Board

According to these concerned NPP members and the supporting foot- soldiers, this is the first time they are hearing that a Chairman of a public Board and not the entire Board, was removing other members of the Board and queried who had given that power to the GRA Board Chairman to do so.

They therefore called for an explanation as to how that was possible to stave off similar show of power by other chairmen of the Boarding of other public institutions.

Prof Adei who is a chairman of the National Development Planning Commission(NDPC), was appointed chairman of the GRA Board after the President withdrew the appointment of Kwame Owusu, the former CEO of the Ghana Maritime Authority (GMA), also known in the media circles as the “air-condition man”. Prof Adei was hurriedly sworn in without fanfare warranting some speculation that his appointment had been rushed.

The foot -soldiers amongst other powers claimed that they are unaware of his locus and contribution to the success of the party in opposition saying, 'this man seems to have his hands in every pie, yet we party people don't know him' they alleged.

They indicated that if it's a professor the NPP top hierarchy wasn’t to chair the GRA then the party does not lack professors so why had he been appointed to chair two important state institutions (GRA and NDPC)and asked if he is the only professor in NPP?

The NPP has a whole gamut of professors .

Continuing they observed, the party is not in dire need of Professors, and called on the elected members and decision makers of the party particularly, the National Executive to take up the matter.

They argued that if the right thing was not done they will continue to regard Prof Adei as a submarine party supporter whose works and so -called deeds for the party are only known to him and his cronies. We want him to implement his fine ideas at the NDPC and allow others who understand appreciate the foot soldiers cries and have their concerns at heart, to handle GRA. This political octopus behaviour isn’t helping, they wailed.

Let him remain and shine at the place where JH Mensah , PV Obeng and Dr.Kwesi Botchwey worked and proved their mettle so efficiently.

The senior party member and the foot-soldiers claimed that Prof Adei was over-hyped and over-touted and reminded the public about the running battles he had with the Public Services Commission (PSC) regarding his management style at Ghana Broadcasting Corporation( GBC) when he was Board Chairman and his confrontations with the then Director- General Mrs Eva Lokko.

Penchant for Upsetting the Norm

He has a penchant for upsetting the norm thus creating a tail spin of unease and needless tension even where there's calm, they warned.

The charged foot- soldiers, counselled that those who toiled to bring the NPP to power, must not sit down for Prof Adei's divide and rule tactics as well as sinister manipulations to fester and continue in putrefaction.

In what capacity did he remove the two deputy ministers from their positions on the Board stressing ", somebody must check him.

"The national executives are the Sanhedrin of the party. Take this matter up on our behalf", yelled the foot-soldiers and the senior party person.

The senior party member and the foot-soldiers initimated that,” you can't go to GRA and brush aside what Harry Owusu did and indirectly query and ridicule the administrative work of the immediate -past Commissioner -General, Mr Kofi Nti.

“Prof Adei thinks he is the Charles Atlas in the party. We live to see”, they noted once again.

“He is not the Messiah, he is not our King Kong so why?”, they asked.

They maintained that they will have nothing more to say if it's established that his appointment is in the supreme interest of the NPP and that it is the decision makers of the party who had clothed him with the powers to do what he has begun at the GRA, then they, the foot -soldiers, will rest their case,

In the view of the agitated foot- soldiers and the senior NPP member therefore, such a person who says he does not believe in protocol, must not and should not be considered for the position of Board Chairman.

Finally they asked: does Prof Stephen Adei know how to organize elections? "Let him go ahead and stop protocols to Jubilee House first. We are waiting", they advised.