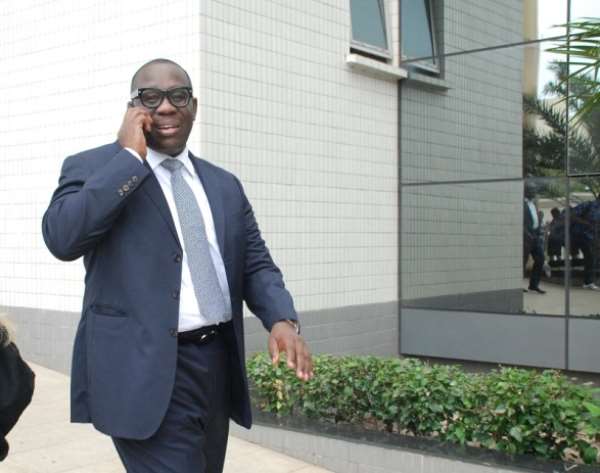 But an Accra High Court presided over by Justice Henry Anthony Kwofie, has asked the State Attorney to provide an Information Technology (IT) expert from (SSNIT) to inform it as to when logs or files relating to the Operational Business Suit (OBS) Contract could be made available.

This has become imperative because Mr. Rahman Mujeeb Ahmed, Counsel for the 2nd accused Mr. John Hagan Mensah, a former IT Infrastructure Manager at SSNIT, had told the court that he had not been furnished with some daily system log files related to the trial.

In the course of the hearing, on Friday, the Director of Public Prosecution( DPP), fidgetted and fretted when she was told that at their last meeting the trial judge ordered that copies of the documents, that the defence counsel required to aid their clients' defence, must be made available to them at the next court hearing, that's after resumption from the Judicial holidays, the DPP said she did not know about that. But she was disproven by the defence, who said they had just seen her holding documentation to that effect.

Mr. Ahmed, had insisted that, those materials would afford his client the opportunity to defend himself, hence same should be made available in the prosecution’s disclosures.

He contended that, he was yet to receive any documents relating to the trial.

Mr. Ernest Thompson, former Boss of the Social Security and National Insurance Trust (SSNIT) and four others have been dragged to court for causing financial loss to the State in the controversial Operational Suite (OBS) of the Trust.

The Defence Counsel prayed the court to make said logs or files available so his client could answer counts 14 to 18 of the charges leveled against him.

The DPP
Yet according to Mrs. Yvonne Attakoah Obuobisa, the Director for Public Prosecution (DPP), she thought members of the defence team were going to move their motion for disclosures, but rather turned to pray the court to compel them to produce logs or files that were not relevant to the trial.

“The records of logging into various storage devices are over a period and they are looking for every log that went into the storage device: those materials have no bearings on accused person’s trial", the DPP indicated.

However, Mr. Ahmed intimated that he was confused as to how the prosecution could describe those files or logs as sensitive but irrelevant to the trial; he, therefore disagreed with the state that those logs or file were irrelevant.

Initial Hiccup
Before case would resume the Court had to wait for an hour for the presiding Judge of the SSNIT OBS case to take over the Court room from his adjudicating Judge colleague who was sitting on a criminal case in the same court room.

Just as everyone thought the case was to commence, the whole case was rather moved to another Court on the 1st floor of the same building instead of the scheduled Court 5 on the 4th floor.

The issue was that another judge presiding over a criminal case had occupied the court and , had said he was not comfortable vacating the sitting to the SSNIT OBS judge who had been officially assigned to Court 5.

Incidentally, this Friday was the first day in court after the legal break; the turn of activities in court, and change of Court room from the usual nearly caused court observers to abandon the court room.

Thus the presiding Judge in the SSNIT OBS case had to find a vacant Court room to move in for proceedings to continue.

Luckily they found a vacant place on the first floor which they used at least for that day.

Drama
As if that was not enough more court room drama unfolded when the case commenced, Mr. Ahmed, the Counsel for the 2nd accused Mr. John Mensah, informed the Court that before the legal break on July 31st that is almost three months ago, they filed an application which they served on the State prosecutors to produce 77 documents that their client needed to defend himself and the Court ordered the prosecutors to ensure that they produce these documents to the accused at least by the beginning of the new legal year.

As if transfixed, the DPP initially said they were never served with that request; then the Judge said he had seen and received the application called DISCOVERIES in July.

Counsel for 2nd accused pointed out to the Judge that the DPP position was not true, because she was holding a copy right in court; just as she was presenting her matter before the Judge.

The DPP suddenly and surprisingly changed her position admitting that "yes she has been served and she has managed to get 56 of the documents from SSNIT, but SSNIT is claiming it cannot find the remaining documents.

She objected to producing the 38th document and said categorically that " BECAUSE IT IS IRRELEVANT, IT IS A SENSITIVE AND EVEN PRIVILEDGED DOCUMENT and even VOLUMINIOUS".

This position of the DPP led the Judge to jokingly remark that "the documents in this case are so many and voluminious all this while, that if i even see them or go towards them i am even afraid".

Consequently, the Judge asked the DPP to explain her position on document no 38.

The DPP read a very technical written explanation and said this document is called REPLICATION AND THE ACCUSED WANTS THEM FROM 2016 TO 2017.

According to the DPP apart from one charge which happend in 2016, she did not see why the 4th accused was asking for files spanning 2016 to 2017 so to her the document is not relevant.

Counsel for the 2nd accused took his turn and argued that the DPP cannot sit in the comfort of her office and determine what is relevant for an accused person who has requested for same.

Defense Counsel, pointed out other counts against his client which covers 2016 to 2017.

Capitulating, the DPP conceded that truly there are other prosecution charges other than the one she referred to.

A whole banter ensured between the two lawyers with counsel for 2nd accused supported by the other accused persons lawyers having fun and accusing the prosecutors of ambush prosecution.

Ambush prosecution means trying to keep documents deciding what they will give the court and trying to spring surprises by deliberately coming to court to argue issues without giving them filed notices and also reading only portions of Supreme Court judgments on discoveries instead of reading the whole judgments.

The court therefore ruled that the DPP should bring these documents called REPLICATION to the Court for him to determine what is secretive or irrelevant about these documents to the counts and charges.

Prosecution under siege
Counsel for Mr. Ernest Thompson, the 1st accused, also reminded the court that the prosecution has almost 18 documents to give them but they know what they will do before the next adjourned date.

The Judge subsequently adjourned the case to Tuesday, October 22 and ordered that all parties should file whatever they had to the Court by 25th October.