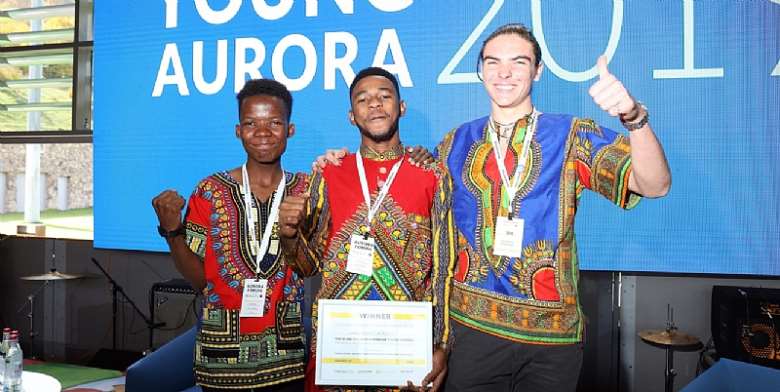 Students from UWC East Africa - one of Africa’s most diverse boarding schools - were awarded the 2019 Young Aurora prize and a $4000 grant for their Smokeless Kitchens project, which aims to reduce the overwhelming effects of smoke experienced in the kitchens of indigenous communities of the Chagga and Maasai tribes in Moshi, Kilimanjaro.

Presented at the Aurora Dialogues: Humanitarianism in Education Conference the Young Aurora prize encourages, supports, and showcases UWC student-driven projects which address humanitarian issues with innovative, sustainable, and concrete solutions. The judging panel comprised notable figures in the field of education and humanitarian work, including the CEO and Co-Founder of Teach for All, Wendy Kopp, celebrated social entrepreneur and co-founder of the Aurora Humanitarian Initiative, Noubar Afeyan, member of the UK House of Lords and Co-Director of the Institute of Global Health Innovation, Lord Ara Darzi, and distinguished Finnish politician, Pär Stenbäck.

The project was praised by the judging panel for addressing the root causes of a critical humanitarian issue in Tanzania. It helps reduce instances of chronic respiratory diseases and the time women spend collecting firewood, ensuring they can dedicate a greater proportion of their time to generating income for themselves.

Tanzanian team member, Yahaya Ndutu, who was himself diagnosed with a respiratory disease at a very young age due to smoke and dust, commented: “This project has shown me that even teens, with the right motive and a structured organization, have the power to enact life-changing projects".

“It is wonderful to see these UWC students translate their drive and commitment to positively impact their communities into well-structured plans for action. It is exciting to see them today, not just as future change-makers, but making a difference here and now.” said Jens Waltermann, Executive Director of UWC International.

Two other UWC teams were selected as finalists to present at the Aurora Dialogues: Humanitarianism in Education Conference in Armenia. The teams from UWC Atlantic (Wales) and UWC Pearson College (Canada) were awarded $2000 each. UWC Atlantic’s Young Voices project is a peer-led civic education program that aims to cultivate civic awareness in the local community through increased engagement among young people in Wales. UWC Pearson College’s Precious Plastic project saw the team build a small plastic recycling factory on campus, with the idea of selling the materials it produces to generate profit and further fund the project.

It is a joint initiative between the Aurora Humanitarian Initiative , UWC , Scholae Mundi and Teach For All .

About UWC East Africa
UWC East Africa (UWCEA) is the 18th school to join the UWC movement. It was established in 1969 as International School Moshi and later opened a second campus in Arusha in 1987. It is a fully accredited independent International Baccalaureate (IB) school in northern Tanzania providing an education for residential and day students from both the local and expatriate communities. More than 500 students from over 40 nationalities aged from 3 to 19 years attend UWCEA on its two campuses.

About UWC
UWC (United World Colleges) is a global movement that makes education a force to unite people, nations and cultures for peace and a sustainable future. It comprises a network of 18 international schools and colleges on four continents, short courses and a system of volunteer-run national committees in more than 150 countries.

Today, 10,725 students from over 160 countries are studying on one of the UWC campuses.

Admission to a UWC school is independent of socio-economic means, with over 80% of UWC national committee-selected students in the IB Programme years receiving full or partial financial support.

Since the foundation of the first UWC college in 1962, UWC has inspired a network of more than 60,000 alumni worldwide, who remain engaged with the UWC movement and committed to contribute to a more equitable and peaceful world.