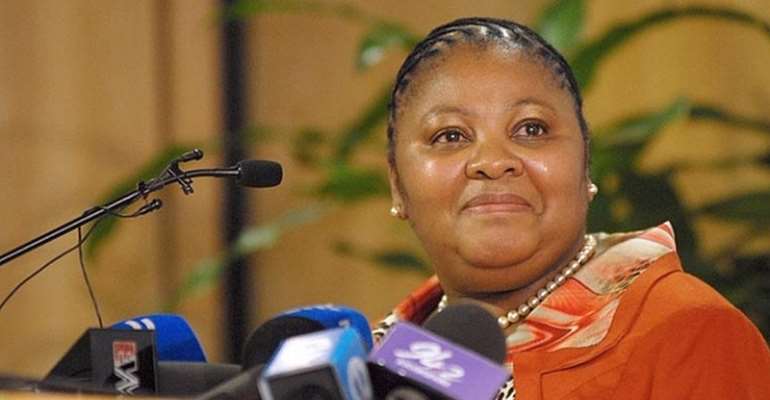 South Africa’s Minister of Defence and Military Veterans, Nosiviwe Noluthando Mapisa-Nqakula, remembers the day she walked into a conference of defence ministers, confident and ready for deliberations, and realized that her counterparts, mostly men, thought she was just an aide to a defence minister.

Their surprise grew when she sat in the chair reserved for the minister from South Africa.

“Their reaction was like, ‘Oh, OK, you are the defence minister of South Africa?’” Ms. Mapisa-Nqakula recalls in an interview with Africa Renewal at the UN headquarters in New York.

The lady minister is soft-spoken, chatty and charming, but she’s toughened by years of courageous activism during the apartheid era and the storied actions that led to her becoming head of key government ministries.

On issues relating to women’s empowerment, Ms. Mapisa-Nqakula’s steely resolve comes to the surface. “Women must take their rightful place,” she says emphatically. “Women don’t want to be patronised, they want to be recognised for what they do.”

South African women, like women in other African countries, face many obstacles, including income inequality and cultural practices that discriminate against them. But Ms. Mapisa-Nqakula is optimistic about women’s march toward equality, believing that her success despite myriad obstacles, and the successes of others like her, may begin a domino effect that will ultimately lead to a positive social change.

“South African women are assertive and are rising to the challenge. Women all over the world are taking their rightful place,” she points out.

Of her views on women’s empowerment, she favours a focus on women’s abilities, which is why she draws attention to her substantive accomplishments.

“For me, the proof is in the pudding. I think I have earned [the South African people’s] respect,” she says.

Key accomplishment A key accomplishment of her ministry is making the South African National Defence Force (SANDF) attractive to “men and women [who will] enlist and be deployed.” Women are particularly encouraged to join the forces, she adds.

The minister is also laser focused on SANDF’s promotion process, and she insists on fairness and balance. So far, the results are impressive: five major generals and 38 brigadier generals are women. “They earned their ranks,” she points out. Just two decades ago, there was only one female major-general in the SANDF.

The generals know I will scrutinize any promotion list before approval. They know the minister will ask the question, ‘Any women on the list?’

“The generals know I will scrutinize any promotion list before approval. They know the minister will ask the question, ‘Any women on the list?’ It’s a politically conscious process, and I let the generals know why it must be done that way,” she says.

Political consciousness in this context is rooted in South African history. The struggle against—and victory over—apartheid transformed the notion of equality, including racial and gender equality, into an economic and social necessity. The post-apartheid constitution and other legal structures enshrine that necessity.

Section 9 of the 1996 Constitution of South Africa espouses equality and discourages discrimination based on race, gender or disability. Other women-empowering legislative mechanisms include the Promotion of Equality and Prevention of Unfair Discrimination Act, (2000), the Employment Equity Act (1998) and the Domestic Violence Act (1998).

By June 2019, women made up half of the government’s cabinet, making South Africa one of four African countries (the others are Rwanda, Seychelles and Ethiopia) to achieve gender parity in the cabinet.

Current legal provisions on equality strengthen Ms. Mapisa-Nqakula. “I let the spirit of the constitution manifest in the vision and work of my ministry,” she explains.

While there have been cases of sexual exploitation and abuse (SEA) involving South African peacekeepers, Ms. Mapisa-Nqakula’s goal is to reach zero cases. “I take it personally. Even a single incident of SEA, I become emotional,” she says.

In conversations on SEA with troops on peacekeeping duties, she injects the sensitivity that only a woman and a mother could. “One embarrassing thing to a man is when a woman minister asks him, ‘Why do you have to do that? Why do you need to lose everything you have invested in over the years?’ Much as I am a minister, I am also a mother.”

The defence ministry is implementing several measures to instill discipline in troops. “All South African troops going on peacekeeping missions must undergo a rigorous SEA training. There is not a single soldier who does not know what sexual exploitation and abuse is and what the consequences are,” she insists.

In addition, Ms. Mapisa-Nqakula says that South Africa has established military tribunals in countries of deployment to expedite adjudication of SEA cases involving its troops. Offenders face stiffer penalties now than in the past: they could lose their jobs and benefits or be sentenced to long jail terms.

Just recently, she says, three soldiers were dismissed, and they all will lose their benefits.

By the time she became a minister, Ms. Mapisa-Nqakula was already familiar with military ethos. In the apartheid days, with an active role in the African National Congress, she undertook military training in Angola and the Soviet Union. “That was in my younger life. I was quite adventurous then,” she reminisces.