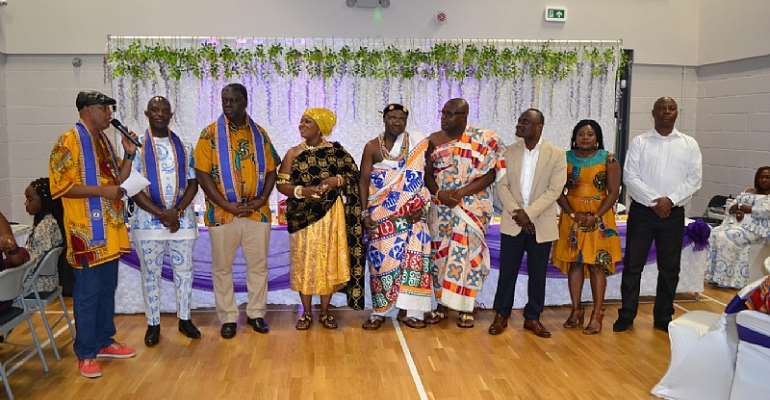 On Saturday 5th October 2019, Ghanaians from across Europe converged on Milton Keynes for the Annual General Meeting of GaDangme Europe (GDeu) and the election of a new Executive.

A Dinner Dance was held later in the evening to raise funds in support of the three key initiatives of the GDeu, namely the Abokobi School Project, The GaDangme Students Project, and the Accra Rehabilitation Centre.

In her interactions with the newly elected members, GDeu Advisor, Queen Naa Tsotsoo Soyoo I, who chaired the AGM and oversaw the election process, cautioned against allowing chieftaincy and political affiliations to influence the important work that is ongoing but to focus on achieving real development goals by identifying the skills and talents of those in the Diaspora to provide practical solutions at home.

The newly elected President, Mr Henry Obedekah, who is also the Chairman of Nyemimei Akpeem, Belgium, spoke to Chevening Scholar and reporter for Metro TV, Nii Obodai Torgbor Ashong and laid out his plans for steering the affairs of GDeu.

“What we have been able to achieve with the Abokobi School and EU Training projects is an indication of the GDeu Executive’s commitment to enhancing the well-established legacy of development within the broader GaDangme and I wish to thank my predecessor and the wider membership for laying the foundations on which we are now called to build,” he stated.

Other members of the newly elected Executive are:

Senior Board Advisors, Naa Tsotsoo Soyoo I and Pastor Chester Quartey will assist the Executive in appointing other members to key roles to enhance the performance of the GDeu.

The Executive invites all GaDangme, Friends of GaDangme and the general public to lend their support in diverse ways to our cause.