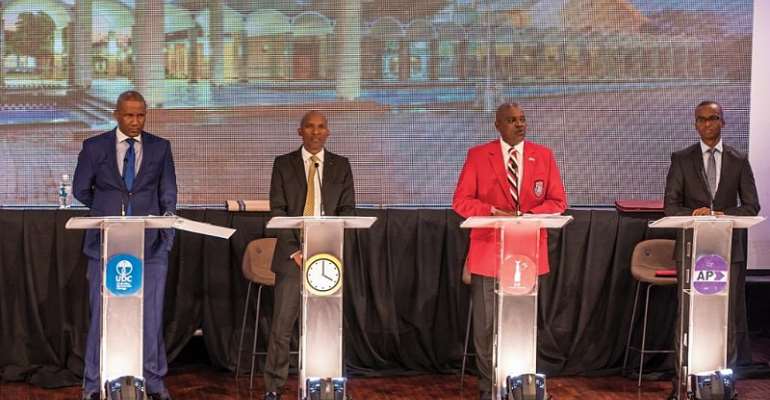 President Mokgweetsi Masisi of Botswana's ruling party is facing a daunting challenge from three candidates in the upcoming general election: Duma Boko, of the Umbrella for Democratic Change's, Ndaba Gaolathe, from the Alliance for Progressives, and the Botswana Patriotic Front's Biggie Butale.

Political observers expect the process in Africa's shining example of democracy is too close to call, in the wake of a bitter power struggle within the ruling establishment.

It pits Masisi against his mentor and predecessor Ian Khama, who bowed out in 2018 after his two terms in office

“Khama wants him Masisi removed and regrets ever putting him there," says Innocent Selatlhwa, a political affairs correspondent with the Gaborone-based Mmegi newspaper.

Vendetta
According to the journalist, Masisi incurred Khama's wrath for denying him privileges reserved for former leaders.

Selatlhwa told RFI the vendetta between the former political chums was aggravated by Masisi's refusal to respect a secret pact allegedly signed with Khama to choose his younger brother Tshekedi Khama as Vice President.

Khama is a paramount chief of Botswana's Central heartlands, the largest constituency with 18 out of the country's 57 parliamentary seats – which is why president Masisi is facing a huge challenge, Selatlhwa explains.

An estimated 1.6 million of Botswana's 2.2 million inhabitants were expected to register to vote but only 950,000 are eligible to cast ballots on Wednesday.

The Mmegi correspondent attributes the shortfall to lack of trust in the government's ability to crackdown on corruption.

Diamond royalties
Meanwhile, there have been damning revelations that South African diamond mining giant De Beers, which exploits Botswana's diamonds, failed to disclose up to 1 billion dollars of revenue it secretly repatriated to Gaborone over ten years.

There are mounting suspicions by the authors of the report that the money may have served to prop up the ruling Botswana Democratic Party.

Furthermore Masisi's government is under pressure from his challengers for failing in his promise indigenise the economy which remains in the hands of powerful foreign interests.

First ever debate
All four candidates running for President squared off in a televised debate on Wednesday, the very first ever organised in the country.

In over two hours of lively exchange, the flagbearers rolled out their plans to roll back poverty, which, despite the country's diamond wealth, affects 16 percent of the population, with 20 percent of the active population unemployed.