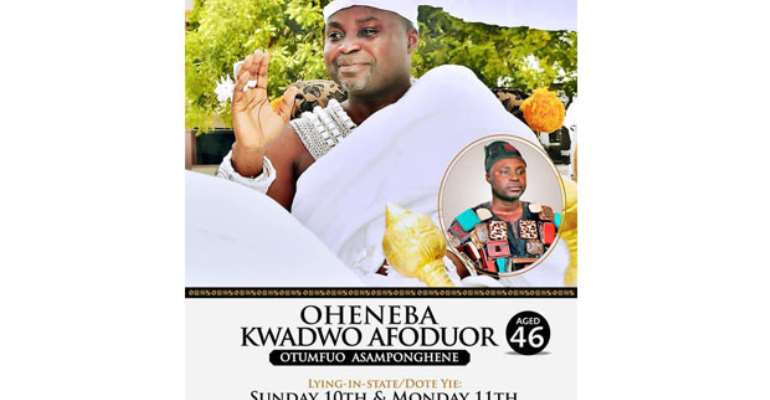 The burial poster of the late Asamponhene

The late Otumfuo's Asamponhene, Oheneba Kwadwo Aforduo, who was gruesomely murdered will be buried on the night of Monday, November 11.

Prior to the burial at a yet-to-be announced royal mausoleum, the Asamponhene's body will lie in state for two days, starting from Sunday, November 10th to 11th, to enable mourners to pay their last respects to him.

A top traditional leader in Kumasi, who demanded anonymity, told DAILY GUIDE that all preparatory works had been done for a grand burial of the chief.

He, however, did not state where he would be buried, saying his final resting place would be decided in the coming days.

“Two prominent towns in the Ashanti Region, which were under the late Asamponhene's jurisdiction, are yearning to have the late chief buried in their towns. We are yet to take a decision on the exact place he will be buried. But he will lie in state at his palace at Krofrom, near Pollux Hotel before the burial,” he said.

The Asamponhene's life was cut short after some fiendish people murdered him and dumped his body in his Land Cruiser car at Ebuom on the outskirts of Ejura.

The police after picking the body of the late chief, who was 46 years old, concluded that he was murdered and they mentioned one Anwar Sadat Mohammed aka Alhaji as key suspect.

After several weeks of search, Alhaji, who had relocated to Burkina Faso to escape arrest, was eventually apprehended.

Even if Nana-Addo changes constitution and contest, Mahama w...
57 minutes ago