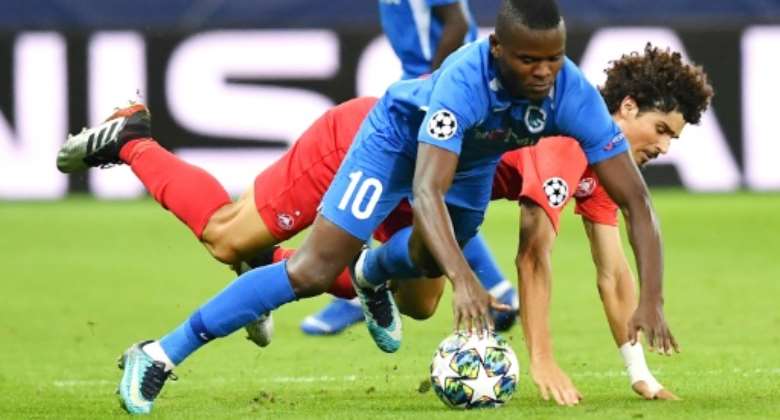 Mbwana Samatta, in the blue of Genk, scraps for possession in the Belgian side's defeat against Salzburg with which they began their Champions League campaign. By JOE KLAMAR (AFP/File)

While Liverpool hope to have Mohamed Salah back alongside Sadio Mane in attack in time for Wednesday's Champions League meeting with Genk in Belgium, their opponents have their own African forward who is a superstar in his home country.

Mbwana Ally Samatta's 23 league goals last season helped fire the unfashionable club from an old mining hub in the Dutch-speaking north of Belgium to the league title and a return to Europe's leading club competition.

The 26-year-old then became the first Tanzanian to play in the Champions League and marked the occasion by scoring on an otherwise miserable night for Genk as they lost 6-2 in Salzburg in their Group E opener.

Since then they have held Napoli to a 0-0 draw at home, a result which gives an unfancied side hope they can spring a surprise against the reigning European champions.

"Some people thought it might be very difficult for us against Napoli but we could have won that game so we will see. We will give everything at home," said Genk coach Felice Mazzu at the weekend.

Just as Genk have brought through and sold on the likes of Thibaut Courtois, Kevin De Bruyne, Kalidou Koulibaly, Christian Benteke and Wilfred Ndidi in recent years -- Divock Origi also spent time here as a youngster -- so key members of last season's title-winning side were allowed to leave.

However, Samatta stayed despite interest from around Europe, including a reported 10 million-euro ($11.2m) offer from Dynamo Moscow.

"He is a complete forward, good with both feet, technical, skilful," said Mazzu in an interview with French magazine So Foot.

In footsteps of Lukaku, Kompany

The former Simba and TP Mazembe star took the Ebony Shoe prize for the best player of African origin in Belgium last season, succeeding the likes of Romelu Lukaku, Vincent Kompany and Marouane Fellaini. He described winning the league as "maybe the best night of my life so far".

Since then, though, the player nicknamed "Samagoal" featured, and scored once, for Tanzania at the Africa Cup of Nations in Egypt, a campaign that ended with a group-stage elimination for the Taifa Stars.

As well as that one strike in the Champions League, Samatta has five league goals this season, albeit none since late August.

He will hope to start afresh, then, on his return after using the recent international break to get married, an event documented on his Instagram account which has 1.2 million followers.

Many of those fans will be eager to see how he gets on against Liverpool as Genk look to end a dreadful run of 14 games without a win in the competition proper.

The Anfield club are looking to end a streak of their own here -- they have lost their last four away matches in the group stage, including a 2-0 defeat at Napoli last month.

A dramatic 4-3 win over Salzburg has since kickstarted their campaign, but Jurgen Klopp's side saw their perfect start to the Premier League season end on Sunday in a 1-1 draw at Manchester United.

After eight straight victories, they needed a late Adam Lallana goal to take a point from Old Trafford in Salah's absence due to an ankle problem. Origi played up front with Roberto Firmino and Senegal star Mane as a result.

"Mo was not ready, that's how it is," Klopp told Sky Sports. Of his chances of returning in Belgium, Klopp simply said: "Maybe for Wednesday, we have to see."