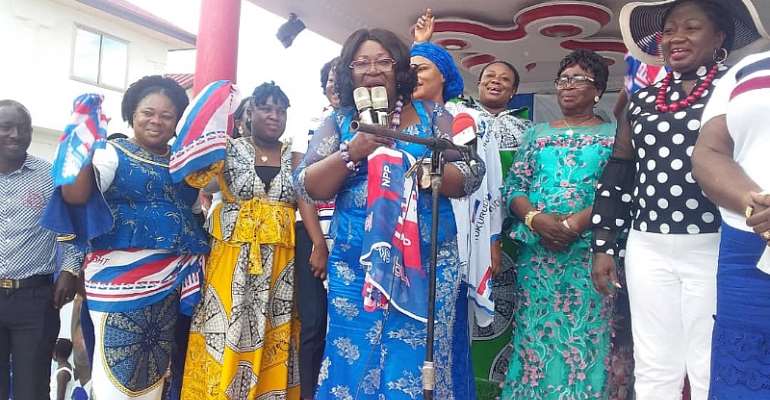 The Chief of Staff at Ghana’s Presidency, Madam Frema Osei Opare on Sunday rallied the women’s wing of the New Patriotic Party (NPP) to lead the upcoming campaign for the 2020 general election.

According to her, women can naturally appeal to the consciences of people better than their male folks.

Addressing participants as well as party sympathizers at the True Vine Hotel in Kumasi where the Ashanti Regional Executives held its regional women’s conference, the first female Chief of Staff in Ghana said women have benefitted the most from the policies of the NPP, adding that they could tell the story better.

She commended the Ashanti Regional Executives especially, Nana Ama Ampomah, the Regional Women’s organizer for pulling off such a memorable conference which she noted will spur the grass-root members on to work.

‘’I am happy that the Regional Women’s organizer has been able to unite all the female ranks of the party and this means we are ready as women to lead the upcoming 2020 campaign to ensure our leader and President gets a renewal of his mandate in 2020’’, Madam Frema noted amidst loud cheers.

NATIONAL WOMEN’S ORGANIZER:
Speaking at the ceremony earlier, Madam Kate Gyamfua, National Women’s Organizer of the NPP urged the women’s wing as well as other identifiable ladies groups to forge ahead in unity to support the NPP government.

The National Officer said only a united front can win the NPP a second term in office, adding that in unity lies the party’s strength.

She asked for support for the government to fulfill the promises it made to the populace in 2020, an enterprise she mentioned can help the NPP win power again easily.

WOMEN CAUCUS IN PARLIAMENT:
Leading the onslaught for the Women caucus in Parliament, Madam Patricia Appiagyei, Member of Parliament (MP) for Asokwa and Deputy Minister for Environment, Science, Technology and Innovation (MESTI) tasked all party members especially the women to trumpet the good programs of the government wherever they are.

She noted that the NDC could not do as much as the NPP has done in 2years and 9 months since the former could not introduce a single social intervention program for the benefit of the people.

NATIONAL YOUTH ORGANIZER:
Henry Nana Boakye, the National Youth Organizer of the NPP urged the women’s wing to lead the way of telling people about the policies implemented by the government.

He called for the sustenance of such grass-root mobilization programs, adding events such as what the women’s wing put out goes to energize the party front.

REGIONAL CHAIRMAN:
In a charged tone, Bernard Antwi Boasiako, Ashanti Regional Chairman of the NPP charged members to sell the message of the NPP by telling people the projects the government has implemented.

According to him, the NPP will by no means lose the favor from the sight of Ghanaians when it is able to show proof of the massive work and social intervention programs like the free SHS, one village one dam and one district one factory policies.