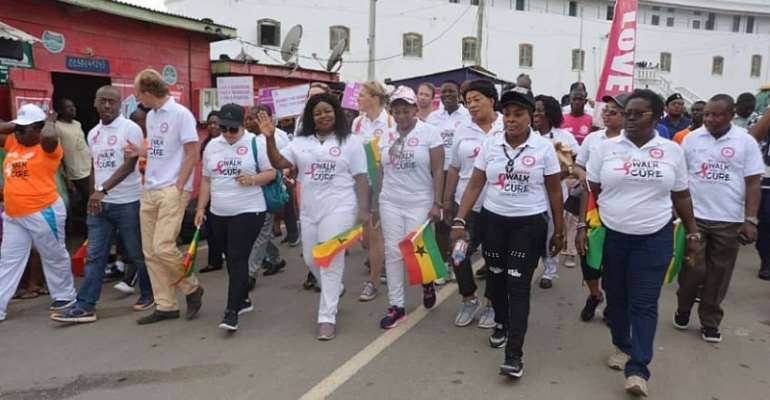 Dr. Beatrice Wiafe Addai, renowned cancer surgeon and Chief Executive Officer for Breast Care International (BCI) says the fight against breast cancer can be won when the populace becomes aware of signs of the disease.

According to her, being a treatable disease it can be dealt with when people become aware of its signs and report the same to the hospital early.

Addressing thousands of participants at this year’s Walk For the Cure in Cape-Coast, Dr. Wiafe Addai said it is not right for people to die from breast cancer when treatment is available.

She called on persons in the health sector as well as stakeholders to do more in creating awareness of the disease so as to minimize or drastically reduce the incidence of deaths from the same.

‘The breast is a valuable part of the body and everything must be done to treat and maintain it. I believe our best bet to dealing with the disease is to create awareness about it everywhere”, Dr. Wiafe Addai stressed.

He also called on state agencies in the area of health to intensify efforts in informing the public about the disease and the remedies available at the hospital.

Dr. Beatrice Wiafe Addai, CEO of Breast Care International (BCI) in a chat with Central Regional Minister, Hon Kwamena Duncan as they took part in this year’s version of the Walk for the Cure.

Mr. Duncan wondered why people had been allowed to die with the myth that breast cancer was incurable.

The Minister asked people who are aware to teach others especially the female folk to perform simple checks on the breast at all times so as to ensure they detect any untoward signs early.

”Let’s display seriousness about breast cancer by carrying the message of it being treatable when it is detected early to everywhere we go”, Mr. Duncan stated passionately.

He said the disease when discovered early can be treated and dealt with.

The Chief asked for increased sensitization effort by the health ministry.

This, he noted will be a good way of getting people informed about the disease as well as educating them about the treatment remedies available.