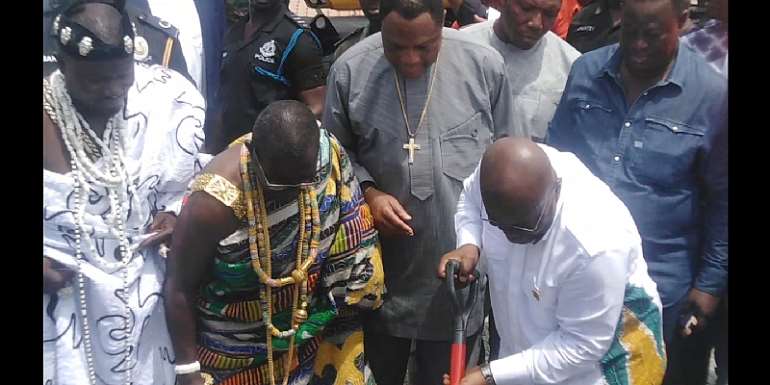 As part of measures of reducing the daily peak hour traffic recorded on the Obetsebi-Lamptey roundabout in Accra, President Akufo-Addo has Monday cut sod for the construction of an ultra-modern interchange.

According to the President, the interchange when completed will improve mobility on the western parts of the Ring Road.

He also added that critical drainage structures that go through the roundabout will be upgraded under this project adding that it will reduce the incidence of flooding.

He further revealed that the construction of the interchange will be undertaken by M/S Queiroz Galvao-UK International as a design and build contract.

President Akufo-Addo emphasized that works will be managed by the Ministry of Roads and Highways through the Department of Urban Roads.

“I appeal to all whose properties might be affected by the various projects to cooperate with the Ministry of Roads and Highways and the other relevant state institutions in accessing the compensation due them”.

President Akufo-Addo added that Government will ensure fair and adequate compensation is promptly paid to all people of such properties.

In an exclusive interview with Modern Ghana, Minister for Roads and Highways, Kwasi Amoako-Atta revealed that the interchange to be built is flood-free and will last longer than the Centre interchange built years ago by the NDC.

He said “This roundabout when built will not have flood problems. It will even be better than the one Former President Mahama constructed”.

He also called on the contractor to speed up with work urging him to make good use of working at night.

He disclosed that despite the financial challenges facing the country, there are active road constructions on-going in the sixteen regions of the country

Hon. Amoako-Atta underscored the need for improving productivity and good health of the people thus the construction of the Obetsebi-Lamptey Interchange.

“Security will be provided by the National Security to ensure a smooth construction of the interchange. If contractors work at night, we achieve two things, work is completed on time and there are no vehicles to distract work,” he added.

He also revealed that the first phase of the road construction when completed in eighteen months, will pave way for phase two since it is a composite project.

Hon. Amoako-Attah mentioned that since phase 1will cost Ghana USD35million, he believes the completion of 3 Tiers will amount to USD$150million.

“The peak hour traffic is more than 8000veh/hr. Average speed at peak periods is less than 15km/hr. Major delays are recorded by commuters going through the roundabout. This is compounded by the free flow of traffic from the Ring Road Flyover”.

The Spanish Ambassador to Ghana, Her Excellency Alicia Rico Perez del Pulgar mentioned that the interchange will be a key intercession and the road network of Accra which is very burden by daily traffic.

She said “I am particularly glad that Spain through the Spanish Export Credit Agency is contributing to fund this project. The Interchange has been designed and will be constructed by a Spanish company”.

She added that the construction is another example of Spain’s commitment to promoting the development and financing of sustainable transport infrastructure and urban mobility in Ghana.

She also mentioned that although the interchange will be constructed by a Spanish firm, it will liaise with its Ghana partner and this will create employment for a section of Ghanaians.

The new interchange will improve the daily life of persons living in Accra when completed.

The construction of the interchange is part of a number of actions being undertaken by the New Patriotic Party to improve urban mobility within the western parts of Accra. The Government believes it is tackling critical road projects in a holistic manner where all roads are built to adjust to the weather.