Bobi Is Just A Person Of Interest To Museveni And The Opposition Is Weak! 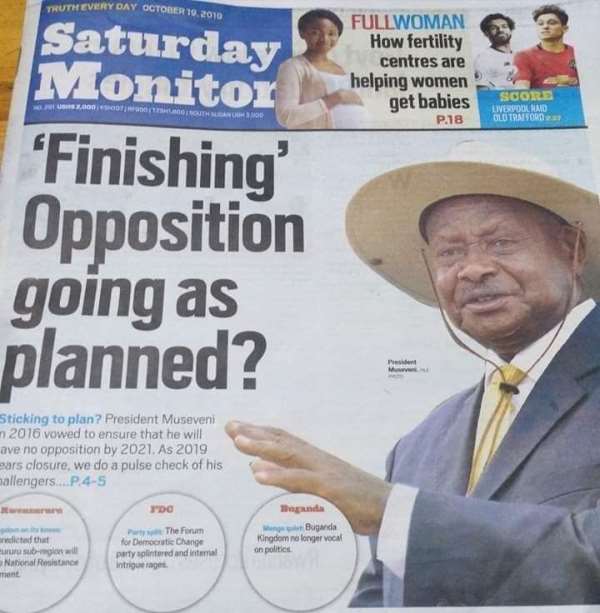 There are times when nothing less than the unvarnished truth will do. This is one of those times- the truth is that I have got mixed morality at the moment, as far as Uganda politics are concerned. I'm not invested in elections at all. From the bird's-eye perspective, the opposition looks weaker than it did before- it's a mess. Dr.Kiiza Besigye had tried to keep things together for a long time, but then Bobi Wine came- got excited and had to show his dick (excuse my French), and now,everyone is back into their little corners. His intentions were noble, I believe, but I guess the situation grew on him and he lost control.

Now, Museveni is doing this thing called TREPANATION- it's where a surgeon basically lifts the upper flap of your scalp, and drill a hole under your skull to release pressure on your brain. Dr.Museveni is doing exactly that with both People power and FDCs right now- he has got his spies doing the drilling- play both sides against each other.The likes of Tamale Mirundi et al, are doing a good job on this one. UPC and DP are already in his bag, I believe.

I have got a feeling that after weakening Besigye to the maximum, he is gonna go nuclear, at some point, against Bobi- I will be actually surprised if his name is on the ballot paper in 2021.I can see more serious charges brought against him before or after the elections. By speaking about Bobi in public, it gives him and his supporters the illusion that he is now a threat to Museveni, that he is so important, but he is just a person of interest to Museveni, and fits very well into his play, such that he is now treating him like the way a fisherman would treat a lobster. You get it out of the water alive, which makes it think that its more important than the other fish that die as soon as they are out of water. When its brought into the kitchen, a lobster starts getting really fidgety when its held upside down to slip it in,head first,down into the pot.Then it thrashes and convulses when its thrown into a pot of boiling water.It's just as though its being boiled alive. The problem with Ugandans is that they concentrate more on what Museveni says than the reasons behind his rhetoric.He is one guy who signs a peace deal and does the opposite,and , in most cases, he says something in order to pump some adrenaline into his opponent.

Museveni works Uganda politics like a CIA agent: lie, exploit and manipulate, and he is very good at it. You can visualise him as weak now because of what you,obviously,see going on in the country, but from my stand- alone point of view, I see a man still in control of the state apparatus. And as long as he is still in control, he is in position to pull or push anything, or anyone, he wants, and he will- seriously.

I was thinking like some of you before the 2016 elections, and I really thought that he won't even be able to hold on for the next two years after the elections, but I was wrong- the guy is still around.He is also a lucky man- God brought him Bobi as a gift, and nobody saw that coming. The thrust of this argument is simple: Bobi is a pawn that has been used to weaken Besigye's base- that's why the NRM PR machine is now a mixed bag- those praising him against Besigye, and those outrightly criticising him. But the fact is that he isn't an upgrade on Besigye at all- his strategy is elections, yet we've been there before, and nothing changed. This would be even more troubling if the main political parties are weakened at the expense of an inexperienced politician- who is only chasing more fame and wind. The biggest challenge of all, perhaps, will be how to galvanise the population again after the 2021 elections- that Museveni is expected to rig again.Ya well, I'm probably going to be called a mole now after writing this! --

More Article
ModernGhana Links
GhQR; The Game Changer
The 'privacy by design' approach for mobile apps: why it's not enough
More Nigerian banks are using chatbots to serve customers, but with mixed results
Military not a magic bullet: South Africa needs to do more for long term peace
Holding Grudges Against Dr. Owusu Afriyie Akoto Will Not Make You Strong But Extremely Bitter; The Minister Is On Course
2024 Presidential Election: Alan Kyerematen’s Golden Advantage over the NDC
No sisterhood here
Former President Kufuor writes: Africa’s smallholder farmers are the linchpin to economic success
Francis Xavier Sosu writes: LGBTQ bill; when the dust settles, reason shall prevail over emotions
TOP STORIES